As per a Supreme Court verdict, 10,323 teachers will lose their jobs by March 31 in Tripura 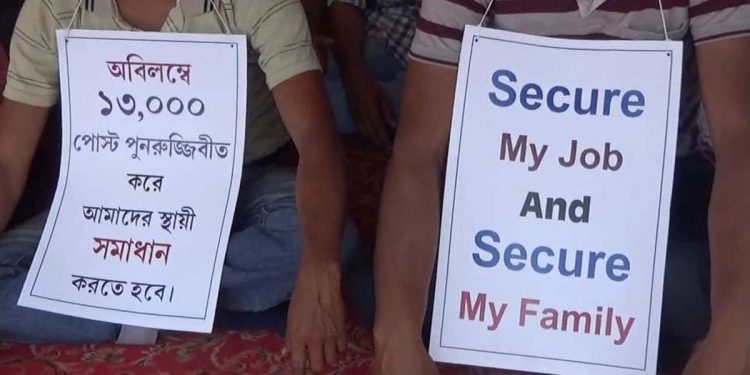 Thousands of teachers in Tripura have started a 48-hour sit-in demonstration from Saturday morning demanding protection of their jobs.

As per a Supreme Court verdict, 10,323 teachers will lose their jobs by March 31 in Tripura.

The former Left Front government recruited these teachers during the period from 2010 to 2014.

Some aspirants, who did not get the jobs, filed a case in the court and argued on the recruitment policy of the former government.

Finally, the Supreme Court ordered to terminate 10,323 teachers and March 31 will be the last working day for these teachers.

Now these teachers, who will be terminated, have started a movement in Tripura to save their jobs.

The 48-hour sit-in demonstration has been organized under the banner of the All Tripura 10323 Ad-hoc Teachers and Employees’ Association.

Bimal Saha, the president of the Association, said, “The sit-in demonstration, started at 10 am today (Saturday), will continue till 10 am on March 16.”

He also said, “We have no other alternative or choice. We appeal to the state government to save our lives and jobs.”

Saha also said there was no fault on their part.

They sought jobs and faced the interviews and were appointed as teachers accordingly.

“If the earlier government followed a faulty recruitment policy, then why should we suffer?” he questioned.

After serving 7-10 years as teachers, the teachers are on the way to be terminated.

Saha added, “Before coming to power, the BJP had promised us that our jobs would be saved at any cost and now they should keep their promise.”