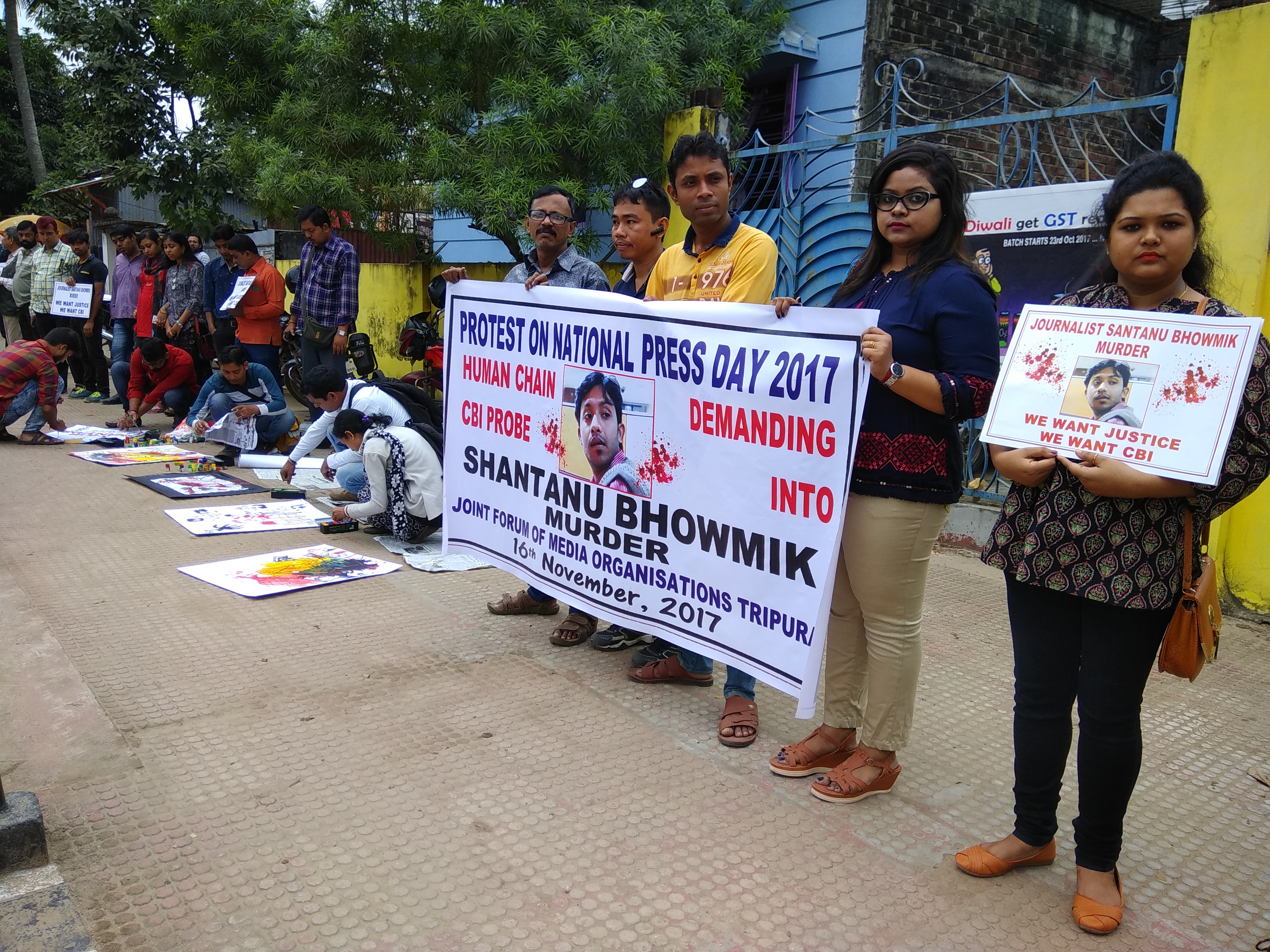 As the National Press Day is being celebrated throughout the globe, in Tripura’s capital Agartala large number from the media fraternity were seen forming human chain to press the government for their demand for a CBI probe into the murder of their colleague Santanu Bhowmik.

Santanu, a journalist working with a local TV channel, died in suspicious condition while he was covering a clash between the TUGMP, tribal wing of ruling CPIM and another opposition tribal party IPFT at Mandwai on September 20 last.

Right from the day one large section of the media fraternity has been demanding for a CBI.

On that very evening separately two teams had even met the Governor Tathagatha Roy and Chief Minister Manik Sarkar on the demand for investigation by the central agency.

A delegation of the journalists visited the spot of murder of Santanu and spoke with the locals there who alleged that the murder happened in front of the police who could have stopped it. They also found irrelevancy in the arrests of those suspected and shown by police relating to the case.

Later eleven organisations of working journalists, photo-journalists, TV & web journalists and owners of media houses of Tripura on the occasion of Gandhi Jayanti organised a one hour sit-in-protest in front of Gandhi statue in Agartala demanding  CBI investigation into the murder of TV journalist Santanu Bhaumik.

Slain Santanu’s father Sadhan Bhowmik also wrote to the Chief Minister and demanded for a CBI probe as he suspected a big conspiracy in his son’s murder.

However, the DGP of state police A K Sukla denying allegations and as per the state government’s decision had declared a probe by SIT which shall be headed by an IG level officer and arrest of three persons related to the murder.

Though the ruling CPIM alleged that Santanu was murdered by the IPFT hooligans on the contrary the alleged party has also demanded a CBI probe into the murder along with the opposition BJP which raised the issue in the just concluded session of the Tripura Legislative Assembly and alleged that the SIT probe was just an eyewash and to save the police.

Meantime, Tripura CM Manik Sarkar who also holds the Home portfolio said that he had total confidence on the SIT. Earlier Sarkar had visited the house of the victim and declared Rs 10 lakh ex- gratia for the deceased journalist family.