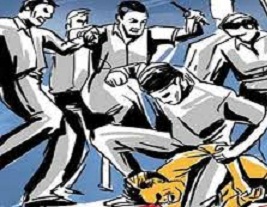 Now Tripura witnesses lynching of a school boy by an irate mob.

The incident took place at Garjanmura village under Udaipura sub-division.

The youth identified as Ripan Sarkar was the son of one Manoranjan Sarkar.

He was staying at Udaipura at his maternal uncle house for his studies.

Ripon was a student of Garjanmura School in class XII.

On Thursday afternoon, one of his neighbours called his maternal uncle Prafulla Sarkar and informed that his nephew has been beaten by some other neighbours.

After hearing this, Prafulla Sarkar rushed to the spot and saw that Ripon was seriously beaten by some neighbours.

According to Prafulla Sarkar he tried to stop them but failed.

Then he tried to contact Kakraban police station. But he could not communicate with the police.

Prafulla Sarkar said after failing to stop the neighbours to beat his nephew and failing to communicate with police, he rushed to the house of ‘gram pradhan’ (village head).

And with the help of ‘gram pradhan and ‘upa pradhan’ (second head of village) he called police.

After reaching the spot police recovered Ripon in serious condition and took him to Gomoti district hospital.

But he was declared brought dead by the doctors.

A murder case has filed at Kakraban police station by Prafulla Sarkar.

In his FIR, Prafulla Sarkar alleged that Narayan Sarkar, Liton Sarkar, Manik Sarkar, Samar Sarkar and some others killed Ripon.

Villagers told Ripon had fallen in love with a girl of the same village.

And the girl’s relatives had beaten him mercilessly after call him in their house.