Rahul Gandhi in Tripura, attacks BJP but no word against Communists

Congress wants the people of the state-run Tripura and not by RSS from Nagpur: RaGa 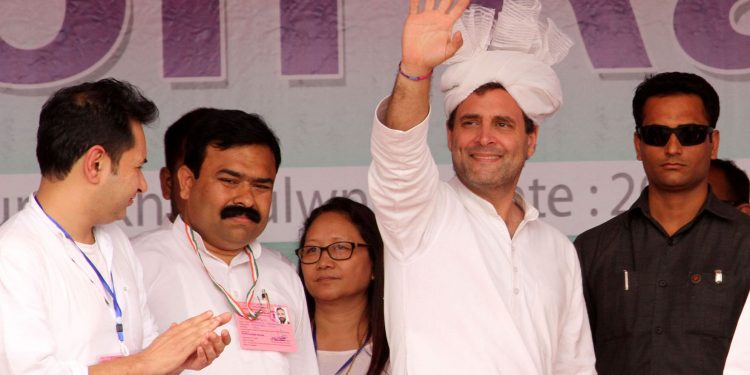 Congress president Rahul Gandhi on Wednesday vehemently attacked the BJP saying that the ensuing Lok Sabha election is very vital and the people have the choice of choosing the Congress that believes in the ideology of unity amongst all and the BJP which has the ideology of division and hatred on the basis of religion and caste.

Rahul Gandhi said this while speaking at the Khumpui school ground at Khumlwng on Wednesday during the launching of Congress’ campaigning in Tripura for the general elections.

According to the All India Congress Committee (AICC) president, the biggest challenge to the nation today is unemployment and under Prime Minister Narendra Modi, who had promised to create two crore jobs every year, one crore people have lost their jobs and earning, and Tripura also has the same situation with 7.5 lakh unemployed.

Rahul Gandhi also said, “Under Prime Minister Narendra Modi, in the year 2018, one crore Indians lost their jobs, which means every day 3000 youths who were working had lost their jobs. Still Modi keeps beating his drum in which he never speaks a single truth.”

“Modi all of a sudden at 8 PM declared demonetisation with promises to bring back black money and attack terrorism but nothing happened. With this he took out the cash from your pocket, poor people had to stand in long queues to deposit their money and it benefitted thieves like Vijay Mallya, Nirav Modi, and Mehul Choksi, Lalit Modi. With the help of the Chowkidar, all India thieves have turned their black money into white.”

He alleged that when Modi and union finance minister Arun Jaitley denied waving loan of poor farmers of the country they could wave loan of 15 richest Indians which amount to 3.5 lakh crore.

Rahul Gandhi said, “During the tenure of UPA government at the Centre, Rs 70,000 crore loan of farmers was waved that benefitted lakhs of farmers and recently after the Congress came to power in the state Rajasthan, Madhya Pradesh and Chattisharh within two days after the government was formed farmers’ loan was waved.”

He said there was massive corruption in the Rafale fighter jet deal and Rs 526 crore fighter was brought for Rs 1600 crore and this was done by the Prime Minister to benefit Anil Ambani by Rs 30,000 crore.

Rahul Gandhi claimed that the ‘Chowkidar’ and Anil Ambani would land in jail if the issue is investigated by Modi who changed the CBI director at the dead hour of the night when he tried to investigate.

The Congress chief said in no circumstance he and the Congress will allow the Citizenship (Amendment) Bill to pass in the Rajya Sabha.

Rahul Gandhi said in 2019 the Congress will form government at the Centre and once that happens, he is confident that the Congress would return to power in Tripura as well.

He added that when Congress forms the next government, it would reinstate special category status for the Northeast along with the industrial policy that has been stopped by the BJP.

He added that when Congress will come to power, after the general elections, Tripura will have better connectivity with the rest of the country.

The Congress chief said that Congress will introduce Tribal Bill and ensure more power by direct funding from the Centre for the Tripura Tribal Areas Autonomous District Council.

Gandhi said Congress wants the people of the state-run Tripura and not by RSS from Nagpur.

He also said that immediately after Modi is removed and Congress comes to power in Delhi, minimum guaranteed income that ensures a reasonable amount of income to the needy.

However, Gandhi was not seen speaking against the Communist which is a considerable force in the state which after 25 years rule was removed by the BJP only a year back.

The Congress chief along with the state president Pradyot Kishore Debbarma, former CM Samir Ranjan Barman and other senior leaders were expected to declare the candidates for the two seats of which the East is ST reserved.