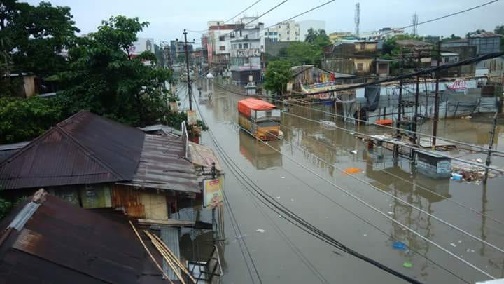 The overall flood situation across Tripura improved marginally on Tuesday with water level receding in all the major rivers and no heavy showers during the last 24 hours.

This was informed by concerned official sources.

According to official records, there are 17,840 inmates as of now lodged in 71 relief camps across the State.

The concerned authorities also said that if rain does not occur, then the affected people will started moving to their respective homes.

Meanwhile, people taking refuse in make-shift camps have expressed their anguish over shortage of relief materials.

The inmates have also complained about inferior quality of food being supplied in the relief camps.

Notably, areas adjacent to River Howrah in Jirania and Sadar sub-division are the worst hit due to flood triggered by incessant rain over the last couple of days.

Crops spreading over hundreds of acres of land have been washed away due to the flash flood.

Meanwhile, the State Government has already sought a financial assistance of Rs 49 crore to compensate the affected villagers but the funds are yet to arrive in the State.