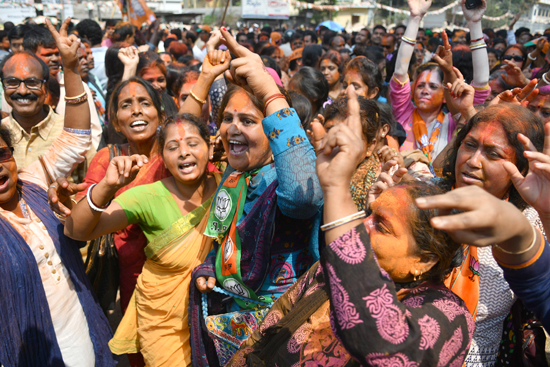 BJP supporters celebrating the party's victory in Tripura election, in Agartala on Saturday.

BJP’s victory in Tripura is undoubtedly astounding. The party, which got only 1.54 per cent vote share in 2013 assembly election, succeeded in winning Tripura by a two-third majority. Political scientists are still not in a position to explain the dynamics of BJP’s landslide victory against the Left Front.

Most of the political pundits had described the exit poll results of Tripura as “erroneous”, and had claimed that 69-year old Manik Sarkar will probably succeed to survive the massive electoral onslaught by the saffron brigade. Sarkar was always known as an honest and austere Chief Minister. And, Tripura was definitely the best-administered state in the northeast where human development indicators like literacy, health, and cleanliness are better than many other states.

But, if Manik Sarkar was so good as the CM, then what could be the reasons for the Left Front’s debacle in Tripura?

The BJP was probably smart enough to pick up three major issues of the state – unemployment, poor salary and alienation of the indigenous tribals.

But, the hike was not enough for the government employees because they knew that the 7th Pay Commission scale will be much higher than what the Manik Sarkar government had offered them, and probably preferred to vote for the BJP.

The salary issue found prominent space in the BJP’s Vision Document for Tripura, and as well as in the speeches of its leaders, including Prime Minister Narendra Modi, Amit Shah and Finance Minister Arun Jaitley. If a government servant’s salary is Rs 20,000 under the 4th Pay Commission, it’ll increase to at least Rs 35,000 under the 7th Pay Commission, the BJP leaders had explained.

Secondly, the issue of unemployment was the definitely the twirl of the BJP’s call for Chalo Paltai (Vote for Change) in Tripura. Knowing it well that there were over seven lakh registered unemployed youths in the state, the BJP squarely blamed the Left Front government for the failure to generate employment avenues for the youth. As a result, a major chunk of the first time voters in Tripura apparently voted for the BJP.

It was a masterstroke by the BJP to forge an alliance with the IPFT, a tribal political party fighting for Twipraland (a separate state for the tribals). Knowing it well that the 31 per cent tribal population in the state were not at all happy with the Left Front, and they were being marginalized by the immigrant Bengalis, the BJP made the best use of the situation. Both the BJP and the IPFT had major electoral gains in the tribal areas, and the 1.2 million tribal voters supported the NDA wholeheartedly.

To add to the three major issues against the Left Front, the BJP also mobilized over 50,000 full-time workers across the state for almost six months to work at the grassroots level and garner public support. The constant and direct contact with the poor voters in the remote corners of the tiny state totally changed the dynamics of electoral politics during the last six months in Tripura. The Left Front, which is led by elderly leaders, probably failed to gauge the difference on ground.

Despite the landslide victory, the BJP members in Tripura need not be too euphoric with the success. The members should understand that though the party managed to register victory in 35 seats, its vote share was only 43 per cent. On the other hand, the Left Front, in spite of a strong anti-incumbency wave, managed to get 42.70 per cent vote share. Unfortunately, the CPI (M) could not translate its votes to winning seats.

Similar was the case in Assam in 2016 when the BJP had registered victory in as many as 61 seats, and had got vote share of 31 per cent. Like the Left Front, the Congress was reduced to only 26 seats, still it had managed to get 29.5 per cent vote share.

Secondly, the tall promise to pay the 2.44 lakh government employees at par the 7th Pay Commission may be difficult to fulfil. How will BJP mobilize so much of funds to give salaries as per the 7th Pay Commission when the state does not generate enough revenue? Moreover, the Centre will not pay salaries of the state government employees of Tripura.

Most of the BJP legislators, including those who will be sworn in as ministers, are all green horns in the theatre of politics. And, all of them will heavily dependent on the bureaucrats to run the day-to-day affairs of the state. Some of the bureaucrats, who worked closely with the Left Front government, are heavily indoctrinated, and may create situations for the novice politicians to handle.

Moreover, after taking over the reins of the state, the BJP leadership cannot just think of the welfare of the tribals, and will have to work altruistically for overall development of the third smallest state of India. And, keeping the IPFT leaders happy with their demand for a separate Twipraland will continue to trouble the BJP.

So for the next five years, it is probably going to be a tight rope-walk for the BJP in Tripura.