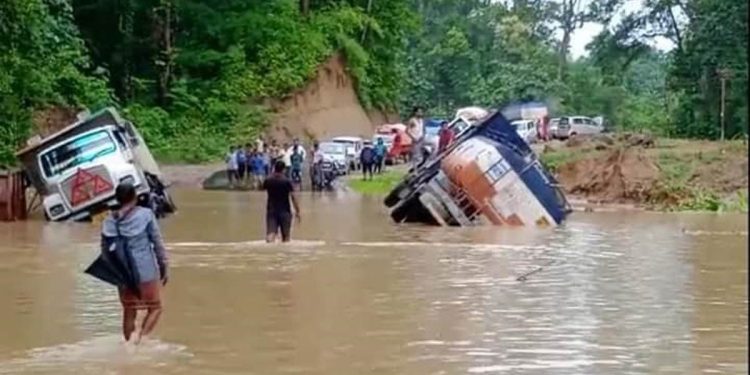 A view of flood scene in Tripura.

Incessant rains for the last several hours have wreaked havoc in various parts of Tripura.

After reviewing the rainfall report on Thursday, the meteorological department said 91.2 mm of rains fell across the state on the day.

Due to incessant rainfalls, the rivers in the state are flowing near to danger level and flood-like situations have emerged in many parts of the state.

According to the meteorological department, in this monsoon season, Tripura received 11% more rains than usual since Wednesday to Friday morning and throughout the day.

There is a possibility of more heavy rains in the next few days.

Meanwhile, a total of 2,137 people of 556 families, who have been affected by heavy rainfalls, have taken shelter in 21 relief camps across the state.

Relief materials have been provided by the district administrations.

In addition, a total of 9 houses were completely damaged, 78 severely and 521 houses were partially damaged due to heavy rains.

Many areas have been inundated by flood waters.

A petrol tanker and a goods vehicle overturned due to flood waters on the National Highway in Nailafa Para area under Ambassa sub-division in Dhalai district, about 82 km away from Agartala.

According to the State Disaster Management Office, the Khowai river is flowing very close to the danger level due to incessant rains.

Various areas across the district have been flooded as a result of which many people have left their homes and taken shelter in relief camps.

No relief camp camp has been opened in Dhalai district so far.

The National Highway remained blocked for a long time after uprooted trees fell at 45 Mile area of Atharmura hill on Friday.

The National Highway has also been submerged by flood waters in Shalbagan area of Nailafa Para under Ambassa sub-division.