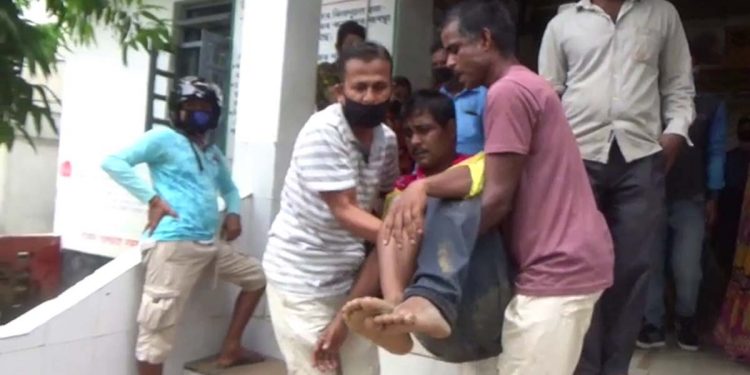 In an attack by drug smugglers, a policeman was seriously injured in Tripura.

The injured policeman, identified as GM Uddin, is engaged in the intelligence branch of Tripura Police.

Uddin, who was stabbed in the back and abdomen with a sharp weapon, has been admitted to the Dharmanagar Hospital.

“The police team was waiting on the Premtala Gauripur road. The police had inputs that a group of drug smugglers would cross the road. Police personnel from Churaibari police station were also present,” sources added.

As expected, a group of 4-5 drug dealers arrived at the spot and they were nabbed by the police team.

The police personnel of the intelligence branch recovered two packets of brown sugar from their possession.

But the drug dealers started attacking the police personnel.

But the drug smugglers’ group beat up the policeman, GM Uddin and took him to one Suleiman Ali’s house along the road where he was hit on the back and abdomen with a sharp knife.

“When Uddin started shouting to save his life, the locals rushed to Ali’s house. But the drug dealers were able to flee from the spot,” sources said.

After a while, another police team reached the spot and took the injured policeman to Kadamtala Rural Hospital for treatment.

“From there, he was referred to Dharmanagar District Hospital,” police sources said.

After receiving the news, North Tripura additional superintendent of police Fencing Darlong rushed to the spot with a large police force.

Police recovered some items including shoes of the drug dealers who fled from the scene.

Locals said, “A group of three persons came in a Maruti 800 car. One of the three, identified as Shiab Ali, came on his motorcycle. Suleiman Ali, in whose house the policeman was beaten, was in his own house.”

Churaibari police recovered a red Achiever bike (TR05A-6483) and took it to the police station.

Police have registered a case in Churaibari police station and started investigation.

The two packets of brown sugar recovered by the police would cost Rs 3 lakh.