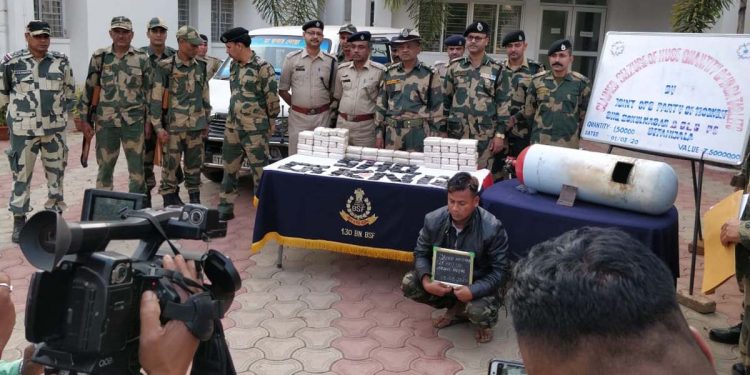 In a series of operations, the Border Security Force (BSF) has been able to nab drug peddlers in BSF uniform and seize contraband items worth Rs 7.76 crore.

In one of the operations on February 29, acting on specific intelligence inputs, a BSF team from the Border Outpost at Rangna under North Tripura district apprehended two Indian nationals in BSF uniform.

They have been identified as Alam Mia, son of Shah Alam Miah, a resident of Thakur Mura village in Khedabari under Sepahijala district in Tripura.

The other apprehended person has been identified as Jhutan Bhowmik, son of Dilip Bhowmik, a resident of Melaghar village under Sepahijala district in Tripura.

The BSF troops also recovered BSF Identity Cards from the possession of the duo.

During a thorough search of the vehicle, the BSF team was able to recover 92 kg of ganja worth Rs 7,82,000, Eskuff Syrup 3 bottles, Niramin Syrup 2 bottles, Tiger energy drink 2 bottles and Indian currency notes worth Rs 7,355.

The total value of the seized items including the vehicle is Rs 9,89,808.

The apprehended persons along with seized items were handed over to Kadamtala PS for further legal action.

In another operation on the same night, a vehicle patrolling party of Border Outpost at Boxanagar under Sepahijala district observed suspicious movement of a motorcycle on the border road.

On being challenged by the BSF party, the miscreants fled from the spot leaving the motorcycle behind.

The seized items have been handed over to Kalamchera PS.

Besides, giving major jolt to drug peddlers in Tripura, the BSF intelligence branch received specific information on Sunday regarding a huge consignment of Yaba tablets coming from Assam to Sonamura border by a civil vehicle.

The information was further developed and shared with the SDPO, Bishalgarh.

A special joint operation was planned by the BSF troops of SHQ Gokulnagar, 130 Bn BSF along with the SDPO Bishalgarh and joint Naka was placed on the route from Agartala to Sonamura with the help of the officers-in-charge of Bishalgarh PS, Amtoli PS, and Madhupur PS.

At about 12 noon, the joint party was able to detain a Maruti Eeco van in front of the SHQ BSF Gokulnagar main gate on NH-8.

During thorough search of the vehicle, the operation party noticed a small rectangular hole (approx. 15 cm x 10 cm) in the backside of the CNG gas cylinder.

The joint operation party also apprehended the driver of the vehicle namely Jahid Hossain,27, son of Abdul Haque, a resident of Bhawanipur village under Jatrapur PS in Tripura’s Sepahijala district.

The apprehended person along with the seized vehicle and Yaba tablets were handed over to Bishalgarh PS for further legal action.