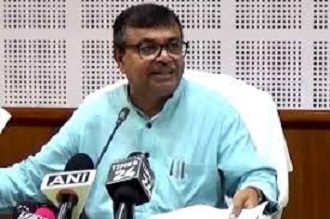 At a time rebel MLA Sudip Roy Baran is going to organize a rally at Agartla against the crime against woman, Tripura law minister Ratan Lal Nath said on Thursday that law and order scenario of the State has improved.

Ratan Lal Nath in a press conference at state civil secretariat mentioned that law and order condition in Tripura is better than earlier Left regime.

The newly saffronized State has witnessed a sharp decline in cases related to crime against women during the past two years compared to last two years of Left Front government in Tripura, Nath claimed.

The law minister claimed that, the conviction rate has also been increased, giving an indication that the State has improved a lot in maintaining law and order.

While drawing a comparative study on the crime graph between the last two years of Communist rule (2016 and 2017) and 20 months of BJP-IPFT rule, Nath said the heinous crimes like rape and murder has gone down across the State.

He claimed, in 2016 and 2017 when Left Front was in power 778 cases were registered on torture against housewife.

But in last two years of BJP-led government, 719 cases of domestic violence were registered.

“An average of 18.23 percent crime against women has been reduced during the past two years and the conviction rate has been increased”, he said.

However, he reiterated that the government is not happy with the success and wants to reduce crime rate in the State as early as possible.

He also said a section of people are trying to mislead the common people on the law and order issue.