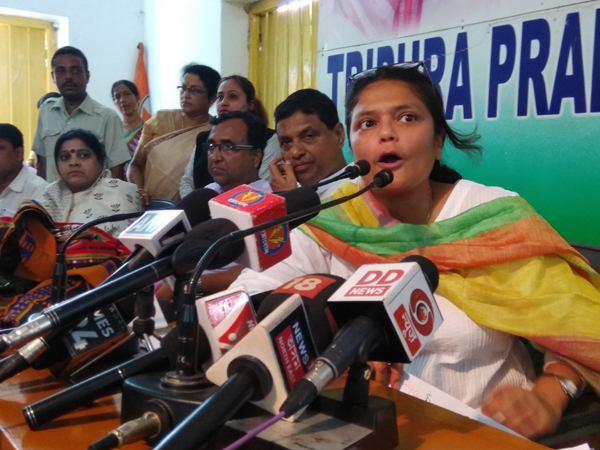 Addressing the media, the AIMC president Deb on Friday launched a blistering attack on Prime Minister Narendra Modi-led NDA government over the alleged Rafale deal scam and the issue of demonetization in 2016.

The Congress young leader attacked PM Modi on the Rafale defense deal alleging that the deal was signed to help Reliance Infra and Reliance Defence Ltd Chairman Anil Ambani which inspite having no experience in manufacturing aircraft was allowed the ‘offset contract worth Rs 30,000 crore bypassing the PSU Hindustan Aeronautical Limited that has been making aircraft for last 70 years.

She alleged Modi who calls himself a ‘chowkidar’ has become a ‘bhagidar’ in Anil Ambani’s new company which was formed just 12 days ahead of the Rafale deal and a defense contract of Rs 1,30,000 including the ‘life cycle contract’ of the aircrafts handed over to the new company.

The Congress leader further claimed that the negotiated price of the Rafale fighter jet was way higher than the one negotiated earlier.

She demanded a Joint Parliamentary Committee probe into the Rafale deal.

She termed the 2016 demonetization as “country’s biggest scam” and alleged that it was a well-planned move to help the cooperative bank of BJP president Amit Shah and his son’s company.

According to her demonetization destroyed the economy and led to unemployment, inflation, death of farmers, small business and poor people.

She also said that in the coming 2019 Parliament election Congress shall make demonetization and Rafale scam the main issue against Modi government.