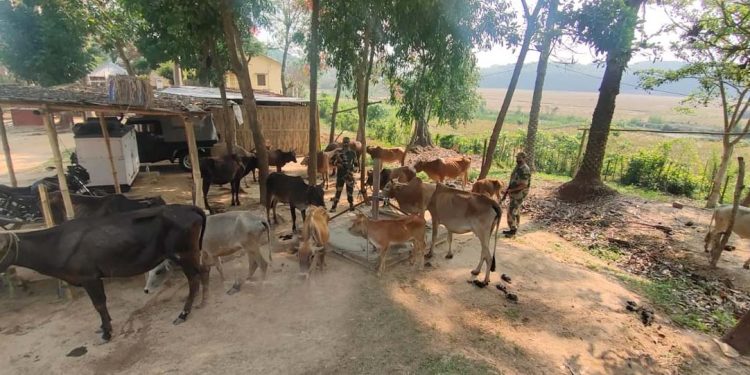 The heads seized by BSF along Indo-Bangla border.

Ahead of the Eid festival, the 74 Bn BSF of Tripura Frontier in a drive against the trans-border crimes along the Indo-Bangladesh border seized 24 cattle heads.

Acting on a tip-off, the vigilant troops of BSF seized the cattle heads along with two motorcycles in the intervening night before May 9 from Kamthana border outpost under Kamalasagar police station in Sepahijala district of Tripura, said a BSF official.

“If the BJP is voted to power, we will stop cow smuggling within 24 hours,” was one of the most important election issues of the BJP in West Bengal Assembly election 2021.

Before the election, central armed forces were very much alert against cattle smuggling in the Indo-Bangla border in West Bengal for few months and as a result the volume of smuggling reduced there.

Ahead of the Eid festival, the greatest festival of the Muslim community, the demand of Indian cattle has increased in Bangladesh.

But for the last few months last during the West Bengal election, trans-border crimes have increased.

An opposition MLA alleged that many heavyweight persons are involved in the cattle smuggling. 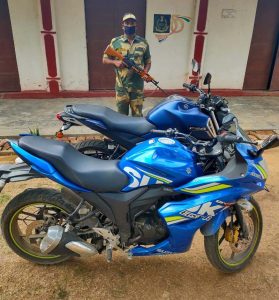 The Indo-Bangla border in Tripura has witnessed many unpleasant incidents like killing, pallet gun injuries, clashes between civilians and BSF jawans along the borderline mainly in Sepahijala district, he added.

But the BSF officials denied the allegation of smuggling through the border.

The commandant of 74 Bn BSF, deployed in Sepahijala district said, the Border Security Force (BSF), engaged along the Indo-Bangladesh border in Tripura is securing the frontier with dedication.