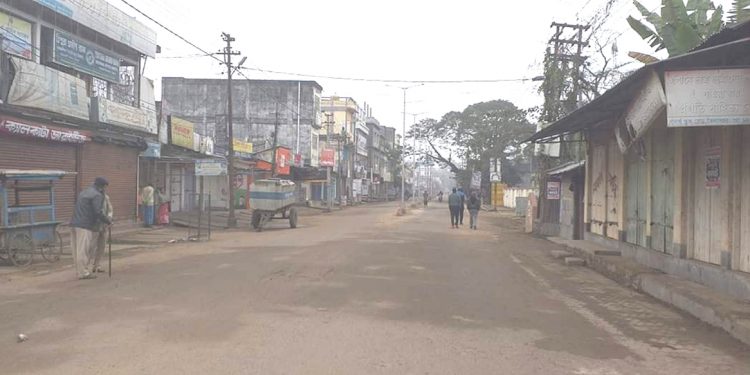 Since the morning till 12 at noon, the bandh totally collapsed the normal life in the state.

The Tripura Central University cancelled all the examinations scheduled to be held on Wednesday due to the bandh.

All the trains were also cancelled in the state.

The banking service was completely hit with the banks remaining closed due to the bandh on Wednesday.

Meanwhile, members of the ruling BJP and all its allied organizations came out to the streets to break the strike since the morning.

They tried to open shops, markets, and offices.

BJP leader Alok Bhattacharjee told media persons that the bandh was going to be a flop show.

He said, “The people of the state do not support this unproductive bandh in the state.”

On the other hand, CPI-M state leader Pabitra Kar claimed the bandh was supported by all sections of people in Tripura.

He also claimed, “A very little number of vehicles plied in the streets.”

Not only small and town based markets but supermarkets also remained closed on the day due to the Bharat bandh.

One of their demands also included stopping the privatisation of public sector undertakings.

The unions also demanded the government to repeal the Citizenship (Amendment) Act (CAA), National Register of Citizens (NRC), National Population Register (NPR) and solve the unemployment issue in the country.

However, the government gave a strict warning to their employees to come to the office and join duty.

The government also warned of action against all employees who would skip office during the Bharat bandh.

Adequate security arrangements were made to maintain peace in the state.