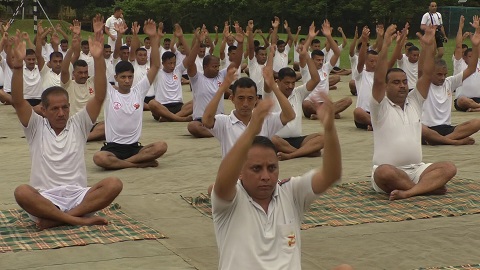 World’s oldest paramilitary force, the Assam Rifles has organized a month-long yoga camp for the troopers aiming at not only keeping them physically fit but also mentally strong and stress-free, said a senior official in Tripura capital Agartala on Thursday.

“Our soldiers are always physically fit but to give relief from the mental stress we have organized this. Often there are incidents of suicide among the troopers due to over stress and this is also aimed at getting relief from that. This also has its benefit in case any trooper is addicted,” said Keshab Sarma, Deputy Commandant of Assam Rifles.

The one and a half months free yoga camp has been organized by Akhanda yoga hospital under the ages of 21 Sector of Assam Rifles at the parade ground in Agartala.

Hundreds of troopers and the family members took part in the camp that started from May 3 and shall end on Friday, the International Yoga Day.

Rajendra Singh, a participant at the camp said that in today’s stressful life often people have work stress and gets fatigued but yoga helps in releasing such hormones in one’s body by channelizing the energy and that helps them to fast come out the stress and get prepared for the next task.

Similar was the opinion of another trooper Bipin who said that most of them being soldiers are physically fit but as they often have to live without their family and gets mental stress.

He added that after joining yoga he is feeling very energetic and stress-free and hoped more such camps take place in the future.

In a similar line, Binita, a woman trooper said that yoga means adding and here they are getting a chance to meet each other and which is playing a vital role in decreasing the stress level.

Various demonstrations of yoga were given as simultaneously hundreds of the personnel began the day with yoga exercises.

The yoga celebrations are being organized after the United Nations had in December 2014 declared June 21 as International Yoga Day.