Agartala: BJP has nothing except card of communal polarisation, says Yechury

The PM has levelled allegations that the Opp is interfering with courts or conducts which is completely unacceptable: Yechury 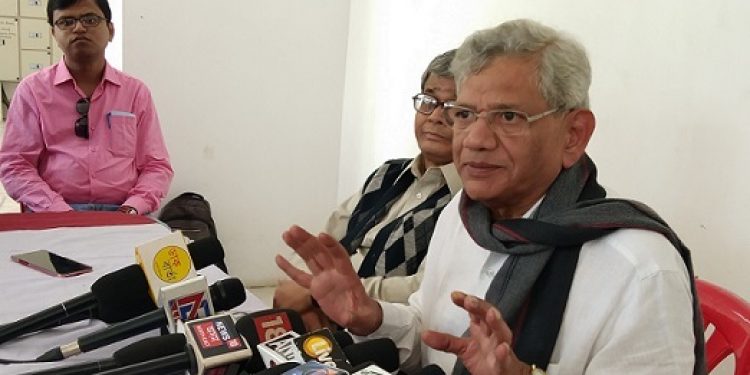 Communist Party of India-Marxist (CPI-M) leader Sitaram Yechury on Monday targetted Prime Minister Narendra Modi and alleged that the PM’s speech on Sunday is a clear admission of the fact that the “BJP today has nothing else except the card of sharpening communal polarization over the temple issue at Ayodhya“.

CPI(M) leader Yechury said this while addressing a press conference in Agartala on Monday.

Yechury while stating that being the Prime Minister of the country, Modi during an election campaign threatened to subvert the legal process on the Ayodhya dispute and as the head of the Government of India, this is completely unacceptable that he indulges in such a talk.”

He said the Ayodhya issue is a subjudice matter and Modi, who became PM taking oath under the Constitution, “cannot threaten to subvert the legal process”.

The CPI(M) politburo member alleged, “The BJP is trying to repeat the Babri mosque demolition incident of 1992 at Ayodhya again in order to create polarization of the Hindu vote bank keeping in view the crucial 2019 general election.”

“During the Assembly elections, the public reaction today is so much against this Government,” he added.

Yechury also said, “The PM has alleged that the highest court of the country is coming under pressure from various quarters. Now, this is a very serious allegation. The independence of the judiciary is something that is sacrosanct in our country and our Constitution.”

“The PM has levelled allegations that the Opposition is interfering with the courts or conducts of the courts’ proceedings which is completely unacceptable,” said the CPI(M) general secretary adding, “If there are any allegations of interference in the independence of the judiciary that has come not from the Opposition parties, but it has come from four senior-most judges who held a press conference to say that there is interference of the executive into the judiciary. So the ball is on the court. It is the Government that is interfering and now according to their game plan, they want some judicial verdict in their favour.”