The galleries consisting of introduction to Northeast India, role of Tripura in the 1971 liberation war of Bangladesh, art and crafts of the Northeast India, lifestyle of northeast India and digital gallery are new addition to the Tripura state museum that was relocated in the more than century old Ujjayanta Palace, once the royal palace of the Manik dynasty and later the legislative assembly of the state. 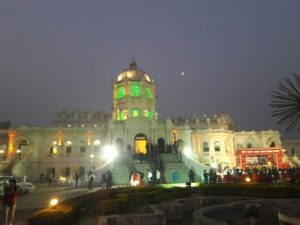 Sarkar in his speech said, “Attempts have been going on to distort the history and in such a situation the museum plays a vital role in not only preserving the history and disseminating the real facts to the young generation especially those of Tripura. Keeping this in mind we feel that museum should be preserved very carefully and so students along with knowing curriculum to pass their examinations should in group visit museum to know their actual history.”

ONGC Tripura Asset Manager Gautam Kumar Singha Roy said, “Indian national flag has its own importance and every year thousands of the armed forces sacrifice their lives to uphold the pride of the national flag. So ONGC has sponsored for the huge flag so that the younger generation feel proud of it and also it shall attract visiting tourists to the state.”

Meantime, Arpita Ghosh a young visitor said, “We use to come here to take selfies and photos with our friends earlier but now the area has changed with the coming up of the flag which generates nationalism among us.”