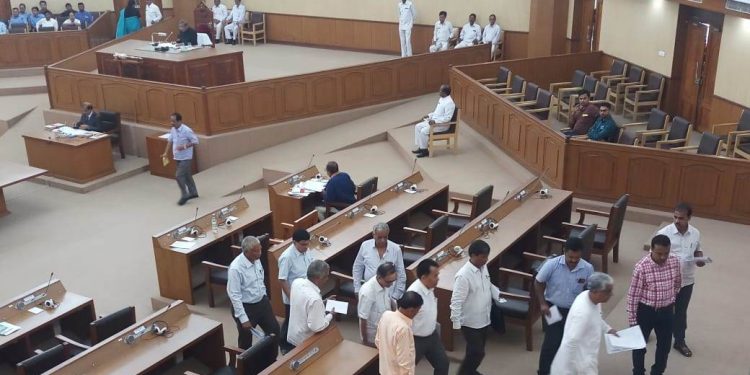 The Tripura Assembly witnessed pandemonium on Friday after an adjournment motion on deterioration of law and order situation in the state was turned down by the speaker.

Speaking in the Zero Hour, deputy leader of opposition Badal Choudhury said 76 children were sexually abused in the last six months in Tripura apart from other gruesome crimes on women, murders, assaults and other criminal activities.

“There are total break down of law and order in many places. If we can’t speak about this in the Assembly, where do we speak then? Nothing can be more important than these issues,” he said.

The Leader of Opposition Manik Sarkar said that the voice of legitimate dissent of the opposition was being forcibly suppressed in the House and they could not stay in the House to legitimize the proceedings.

Thereafter the opposition MLAs walked out of the House for a few minutes but returned soon to take part in proceedings.

In the second half, when the Assembly began after recess, chief minister Biplab Kumar Deb, who is also the Home minister moved the “The Tripura Essential Services Maintenance Bill 2019”.

When the discussion on the bill started, the leader of the opposition said, “Law and Order had deteriorated in the state. The government employees have the rights to express their opinion.

“The government should think before introducing it. We oppose the bill,” he said.

Sarkar was supported by all the members of the CPI-M.

The opposition members then walked out for the second time, but rejoined the House after 15 minutes.