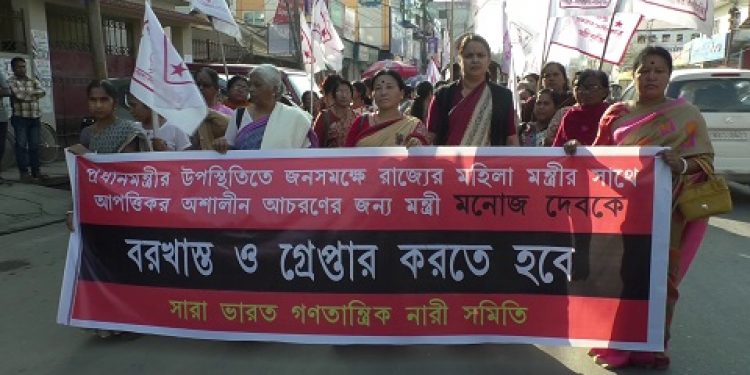 The protesters led by AIDWA leader Rama Das went through the streets of capital Agartala and raised slogans against the minister.

Dhar said, “The most dangerous incident that happened which got released in the social media, in presence of the Prime Minister during broad daylight in front of the huge gathering in the stage a male minister touched a female minister in an indecent manner. He cannot say that purposefully he did not do that. He is the chief of all attacks being organized in Kamalpur right from the first day. Video is there, and now on behalf of Left Front we shall say if he does not resign on his own then the Chief Minister should sack and arrest him.”

He further added, “If in broad daylight, in presence of the Prime Minister, in the stage if such an incident can take place then one can understand what is the condition of present law and order in Tripura.”

He said that it appeared publicly on various social media that Deb put his hand on the waist of social welfare and social education minister Santana Chakma, a young tribal leader.

Dhar, also a central committee member of the Communist Party of India-Marxist (CPI-M), claimed that incidents of rape, murder, and kidnap have drastically increased after the BJP-led government came to power in Tripura 11 months ago.

However, Minister Manoj Kanti Deb speaking to a local media house over phone denied the allegation and said that Left Front which has no issue is conspiring to defame the government with false things which the people of the state understand.