The decision to withdraw their agitation was announced by veterans in the field Subal Dey and Pranab Sarkar on Sunday.

Notably, the first policy announcement made by newly elected Chief Minister Biplab Kumar Deb after the Bharatiya Janata Party- Indigenous People’s Front of Tripura (BJP-IPFT) government assumed office was handing of the investigation of the killing of two journalists in the State by the Central Bureau of Investigation (CBI).

The erstwhile Left Front government did not pay any heed to the demand raised by the journalists’ body of the State forcing the journalists to launch an agitation.

The decision to withdraw their agitation was taken in a general body meeting of TJRPF held at the Agartala Press Club on Sunday. 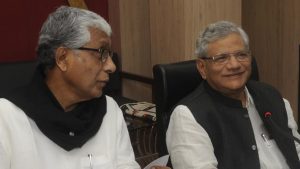 CPI-M delegation visits violence-hit areas: Meanwhile, a delegation of the Communist Party of India-Marxist (CPI-M) led by party’s general secretary Sitaram Yechury paid a visit to those areas that witnessed sporadic violence after the elections.

Several party offices were allegedly ransacked or torches after election results were declared on March 3 last.

The team also visited the residences of some CPI-M supporters whose houses or business establishments were allegedly vandalized in the aftermath of the election results.

The Left leaders also interacted with the family members of the affected cadres.

The delegation also visited Gobind Ballav Pant Hospital in Agartala and interacted with some injured party workers, who sustained injuries during post-poll violence.