Sudip Roy Barman ceases to be a member of the Council of Ministers, says notification

This has come to light in an official notification issued by the chief secretary in-charge of Tripura, Kumar Alok on Friday night.

“Sudip Roy Barman ceases to be a member of the Council of Ministers,” the notification said.

As per the notification (a copy of which is available with Northeast Now) the portfolios held by Sudip Roy Burman have been assigned to chief minister Biplab Kr Deb.

In the same notification, deputy chief minister Jishnu Dev Varma has been given the portfolios of science, technology and environment. 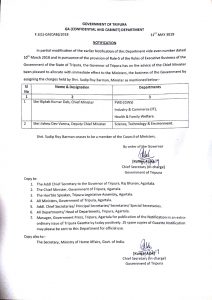 It has been mentioned in the notification that the new allocation of portfolios has been made by the Tripura governor (Kaptan Singh Solanki) as according to the advice of Tripura chief minister Biplab Kumar Deb.

It was also reported that during the last Lok Sabha elections, barman was not seen during campaigns. He also reportedly asked the voters to vote for ‘eligible candidates’ at which the top leaders of the BJP were not happy.

Finally, despite being one of the architects of the the Bharatiya Janata Party (BJP) and Indigenous People’s Front of Tripura (IPFT) coalition government, Barman was shown the door.

In 2016, seven pro-Barman Congress MLAs had quit the Congress to join Trinamool Congress who then joined the saffron party in 2017.