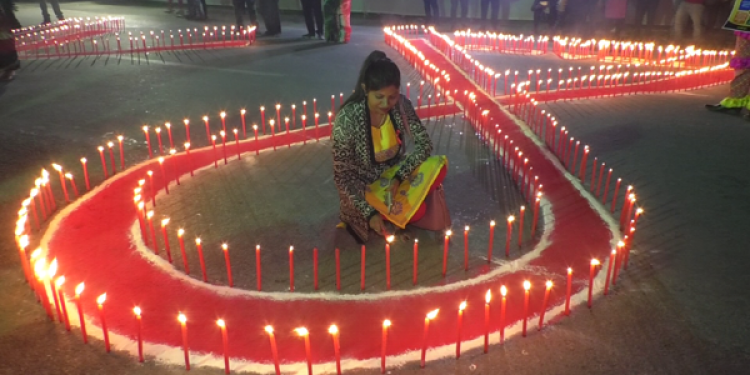 Tripura Health Minister Sudip Roy Barman has expressed his concern over the increase of HIV infection especially in three Northeastern states when the situation in national scene is improving.

He said this after taking part in an awareness campaign against HIV-AIDS organized by the Tripura AIDS Control Society (TACS) on the eve of observation of World AIDS Day on December 1.

Roy Barman said, “It is a matter of concern when the number of HIV infected persons in the country is declining there is a spurt in the number of infected persons in Tripura, Manipur, and Mizoram. Keeping that in view the government of Tripura has declared a war against HIV, against AIDS and we want to through massive awareness campaign to apprise the common people to not keep aloof of those infected rather get their blood checked regularly and have sex with safety measures like using condom. Massive campaign program have been launched and we are hopeful that in the coming years it will be reversed and obviously it’s a challenge to ensure no one contracts HIV.”

Substantiating the prime cause behind the increasing HIV infected persons, Roy Barman added, “It’s because of the rise in the injectable drug users in the state who consume drugs in a group with the same needle and syringe. The government of Tripura has also declared a war against drugs and we have arrested a lot of people who used to carry drugs from Myanmar to Tripura via Mizoram. The police and the administration are on high alert and we are fighting to ensure that not a single youth get addicted to drugs and thereby get in increasing chances of HIV through IDU.”

He added that in order to stop the disease from spreading special measures have been taken in the state accordingly.

The Health Minister with students of Tripura Art college and other NGO’s also took part in the awareness program on HIV-AIDS organized by  TACS.

Several awareness posters, wall paintings, captions beside lighting of candles were done to create awareness on the deadliest disease.

The Indian government spends about one percent of its GDP on healthcare facilities, much less than some African countries, forcing millions to struggle to get medicines.

Human immunodeficiency virus (HIV) transmitted during sex, in blood and on needles and in breast milk, gradually wears down the immune system and can take years to cause symptoms Acquired Immune Deficiency Syndrome (AIDS). It has killed more than 25 million people since the early 1980s.

India is among the top three countries with the highest number of Human Immunodeficiency Virus (HIV) cases, alongside South Africa and Nigeria.