Tournament to be participated by 12 teams from Tripura, Assam, Manipur, Mizoram, and Kolkata 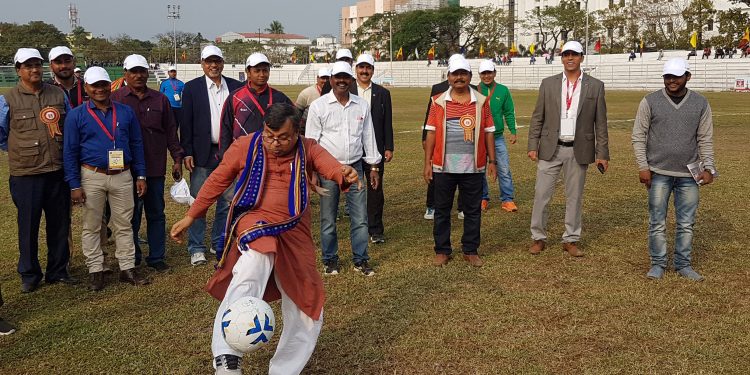 After formally kicking off the tournament, education minister Nath said, “Lucky-Srivastava is one of the most popular football tournaments in Tripura.”

Recently, ONGC increased the prize money a lot and we expect that good teams from neighbouring states will participate in this tournament.

Speaking on the occasion, Asset manager G.K. Singha Roy said the tournament is ONGC’s initiative to promote football among the people of Tripura and provide exposure to the football players of the state.

The final of the knock-out based tournament, organised by ONGC Tripura Asset, will be played on Sunday at Umakanta School ground in Agartala.

The audience experienced a fight between Young Darlong Association (YDA) of Tripura and DFA Southern Samiti, Kolkata which resulted in favor of the defending champion YDA with a result of 6-2.

The Man of the Match was Elton Darlong.

The tournament, affiliated to All India Football Federation, will be participated by 12 teams from Tripura, Assam, Manipur, Mizoram, and Kolkata.

The final match is scheduled to be held on February 24.

Among the 12 participating teams, six are from Tripura, two from Manipur and one each from Mizoram, Meghalaya, Assam and West Bengal.

Prize money for the champion team has been increased to Rs. 5 lakh while the runners-up will get Rs. 2 Lakh.

Last year it was Rs. 2 lakh and 1 lakh for the champion and the runners-up respectively.

The tournament is held in the memory of two ONGCians Justin Lucky and SK Srivastava, who bravely fell to the bullets of militants in 1992.