At least 15 migrant labourers were mowed down by a goods train at Aurangabad in Maharashtra on Friday.

The migrant labourers were returning to Chhattisgarh amid the nationwide COVID-19 lockdown.

The incident took place at around 6:30 am on the Aurangabad-Jalna railway line, stated reports.

The labourers, who had been walking along the railway tracks reportedly fell asleep due to exhaustion.

Another individual has sustained injuries.

Prime Minister Narendra Modi took to Twitter stating he has spoken to Union Railway Minister Piyush Goyal and asked him to monitor the situation. 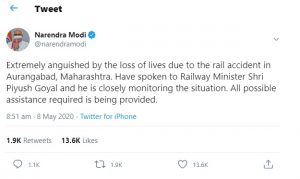 Modi ensured that all possible assistance required is being provided.

‘Extremely anguished by the loss of lives due to the rail accident in Aurangabad, Maharashtra. Have spoken to Railway Minister Shri Piyush Goyal and he is closely monitoring the situation. All possible assistance required is being provided.’

The development comes at a time when stranded migrant labourers across the country are returning to their home states amid the nationwide lockdown.

Some of these migrant labourers were forced to walk long distances to their home states as they were unable to find transport.