To mark the festival, some devotees lie on hundreds of nails and participate in machete game 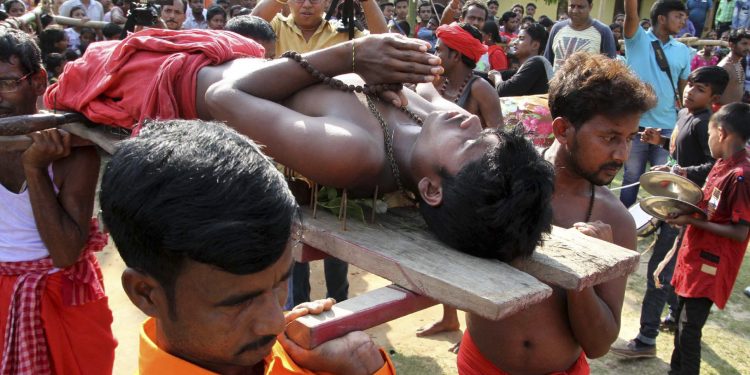 A Hindu devotee lies on a bed of nails as he is carried past spectators during the ritual of Charak Festival at Pratapgarh village in Agartala on Sunday. Image - Northeast Now

Charak Festival was celebrated on Sunday in the rural areas of Tripura with religious fervour, marking New Year according to the Bengali calendar.

The festival is dedicated to Hindu deities Shiva and Shakti and is marked by a strict penance wherein the performers of Charak Puja undergo extreme physical pains and stresses.

Within one body there are two Gods, one is Shiva and the other is Parvati. In this festival, while some performers are buried under mud, some others walk over fire and a few are hung with hooks.

To mark the festival, some devotees lie on hundreds of nails and participate in machete game.

This puja is performed for the welfare of the people of the earth and the nation.

For one month, devotees collect subscriptions from various people for Charak Puja.

According to mythology, from the days of Lord Rama, this festival has been organised and it is the worshiping of Hor (Shiva) and Parvati.

From time immemorial, the festival has attracted a large number of people from different corners of the world.

The devotees keep fasts for one complete month before performing the rituals.

During this period, the devotees live strictly on fruits and do their daily worship.

After a month of fasting and on the day of Charak, a Charak tree is erected.

The average height of the Charak tree is about 15 feet and devotees hang themselves from hooks, as a symbolic sacrifice to the Hindu deity Shiva.

Many others pierce their tongue, body with iron rods or walk on sharp machetes, nails and other pointed objects besides walking over burning charcoal.

The excitement reaches the climax when the performers complete the feat remaining unscathed.

This festival takes place on the last day of Chaitra month and there are several tough rules to be maintained by the devotees with full devotion towards Shiva and bear the pain to show their faith.

According to many, this age-old festival came from ‘Charak Samhita’ (Compendium of Charaka), a Sanskrit text on Ayurveda (Indian traditional medicine).

According to devotees, it is the worshiping of Mahadev (Shiva), the Hindu God and every year, the festival is celebrated on the last day of Chaitra, the last month in the Hindu calendar.

Charak comes from ‘chakra’ or the wheel – the circle of the movement of the Sun.

It is symbolised by setting up of a high pole from which a devotee hangs itself. With the help of a strong rope, he swings himself around the pole.

It is a difficult and dangerous feat. Charak Puja is performed by usually ten to twelve members, including both men and women.

The bearers of the ritual are called ‘Charkia’ and the main performer ‘Deoboinshi’.

These men and women believe Charak Puja as one way of attaining salvation.