This was announced by the Oscar-winning actor himself on Twitter on Thursday morning.

In a Tweet, the 1994 Oscar winning ‘Forest Gump’ actor said he and his wife were in Australia presently and both came down with a fever and they will now be isolated and monitored. 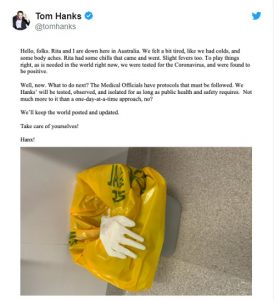 “We felt a bit tired like we had colds, and some body aches. Rita had some chills that came and went. Slight fevers too. To play things right, as is needed in the world right now, we were tested for the Coronavirus, and were found to be positive,” Hanks wrote on Twitter and Instagram.

He also shared a photograph of a surgical glove placed inside a bio-hazard trash bag.

“What to do next? The Medical Officials have protocols that must be followed. We Hanks’ will be tested observed, and isolated for as long as public health and safety requirements. Not much more to it than a one-day-at-a-time approach, no?” Hanks further said.

Notably, Tom Hanks is the first major Hollywood celebrity to have stated publicly that he has been infected with the coronavirus.

Hanks and his wife Rita were in Australia for his upcoming movie about the life of singing superstar Elvis Presley.

Coronavirus that originated in Wuhan city of China has killed over 4000 people worldwide and infected over 1.25 lakh more.