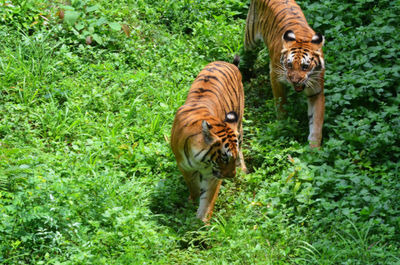 Tiger population in Assam has witnessed an increase along with the rest of India. According to the All India Tiger Estimation Report 2018-19 released by Prime Minister Narendra Modi on Monday, the state has emerged as the seventh highest tiger populated state in India.

As per the report, the total number of tigers in Assam at present is 190.

Madhya Pradesh emerged as the highest tiger populated state in the country with a total of 526 tigers in the state.

Karnataka and Uttarkhand emerged as the second and third highest tiger populated states in the country respectively.

Karnataka has a total of 524 tigers and the number of tigers in Uttarkhand is 442.

Modi expressed his happiness and congratulated the stakeholders who were involved in the efforts of tiger conservation in the country.

” A commitment fulfilled, that too well in advance!  It was decided to work towards doubling the tiger population by 2022 but India achieved this 4 years in advance! India is proud to be home to be almost 75 % of the global tiger population. #InternationalTigerDay”,” Modi tweeted.

The survey covered 381,400 km of forested habitats in 20 tiger populated states of India. A foot survey of 522,996 km was done for carnivore signs and prey abundance estimation.

In the northeastern states of Arunachal Pradesh, Mizoram and Nagaland, sampling could not be done with appropriate mark recapture method due to logistic constraints.

According to the report, in these states confirmed tiger presence locations from tiger scats (confirmed by DNA profile), and opportunistic camera trap photos to model suitable tiger habitat using 13 program MaxEnt were sued.

“Minimal tiger density obtained from individually identified tigers within small intensively searched areas was used to provide a crude estimate of tiger numbers in these states,” the report said.

Northeastern states, however, witnessed loss of 1,237 kms of forest occupancy.