Hima Das wins her fifth gold after finishing 400 by clocking 52.09 seconds at Prague in Czech Republic 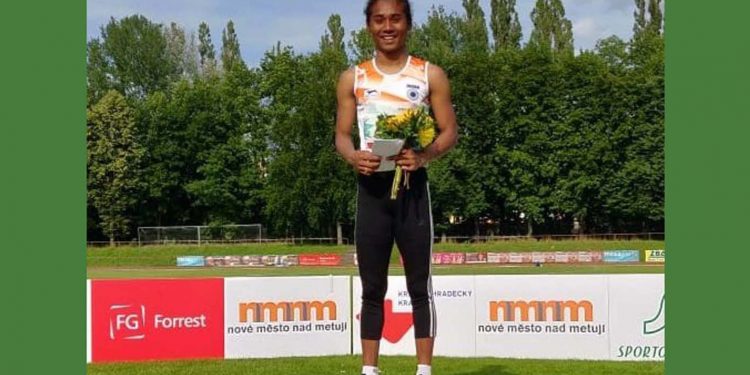 Hima Das, who is also known as ‘Dhing Express’, won her fifth gold in the month after finishing 400 m on the top at Prague in Czech Republic on Saturday.

Informing about her win, Hima Das on her Twitter handle stated: “Finished 400m today on the top here in Czech Republic today.”

According to media reports, Hima Das, who hails from Dhing in Assam’s Nagaon district, clocked 52.09 seconds to complete the 400 m race and registered best timing of the season.

However, the personal best timing of the Indian sprinter, who continues to bring laurels to her country and state, is 50.99 seconds.

She recorded her best timing at the Asian Games last year.

The month’s first gold was won by Hima Das on July 2.

Hima Das won her second gold on July 7 at the Kutno Athletics Meet, also in Poland, by clocking 23.43 seconds.

After that, her fourth gold came in 15 days when she won 200 m race by clocking 23.25 seconds at Tabor Athletics Meet in Czech Republic on Wednesday.