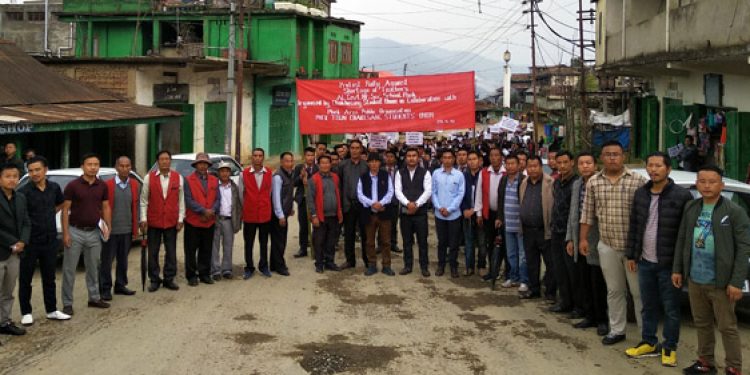 Members of Chakhesang Students Union and others during the protest rally in Phek town on Monday. Image: Northeast Now

The Chakhesang Students Union took out a procession in Phek town on Monday to register their protest against the shortage of teachers.

The protesters have given the state school education department two months’ time with effect from April 29 to “take appropriate measures” to fill up the vacant posts of teachers in the school.

The union was joined by the Phek Area Public Organisation comprising 24 villages, all the chairmen of 11 colonies, gaon burhas (village headmen) and concerned public leaders in the protest, the union said in a statement on Tuesday.

The union said different organisations have submitted memoranda to the department concerned to immediately fill the vacant posts lying in the school’s Higher Secondary section of the school since 2004.

The 11 vacancies were created through means of transfer, promotion and retirement without any replacement, it stated. If the vacancies are not filled up the school could go defunct by next year, it warned.

Besides the members of the civil society organisations, 600 students participated in the procession and submitted a representation to the Phek deputy commissioner, who is also the chairman of the managing board of the school, the union said.

The union also requested the school education department to release textbooks to schools at the earliest.

The school authorities in a separate statement said that a managing board-cum-consultative meeting, chaired by the deputy commissioner, was held on April 26.

The meeting deliberated the issue of shortage of teaching staff at the secondary level and other matters related to the school, it stated.