Tale of humanity in Assam: Bridging boundaries with a boat

Unfettered by parochial religious considerations, Imtiaz Ahmed, a resident of KB Road in Assam’s Jorhat reached out to the Buddhist community at Kaliyani and gifted them a boat on Friday to cross over the rivulet to the Buddha Vihar during the monsoons.

Speaking to Northeast Now, Ahmed said that he had got the 18 feet by 2.5 feet made at Majuli and took it all the way to Kaliyani by a mini truck so that the people could visit the temple even when the waters in the rivulet rose.

Ahmed narrates the story of how he came across this place which lies in the border of Golaghat-Karbi Anglong districts.

“It was about seven or eight years ago, when I was running a travel agency, Travel Treats, (now run by his wife under the banner of Kaziranga Tours and Travels) that I was told about the Buddhist temple by an employee of mine based in Golaghat and how wishes were fulfilled if one prayed there. We decided to go there on Buddha Purnima and walked across the rivulet to the Buddha Vihar located on a sandy piece of land surrounded by water on three sides,” he said.

Ahmed said that the first time he visited the place he was taken in by the beauty and serenity of the place and the statue of the Buddha which seemed to be looking at us straight in the eye with a slight smile.

“When we visited the second time about a month later we were astonished to see the eyes of the statue was down cast but the smile was there,” he said.

Not wanting to believe that there could be movement of the eye in a statue he asked the people whether it had been replaced by a new one but received a reply in the negative.

“I asked a Buddhist scholar and professor Lalit Shyam of Titabar about this and the professor said that the Buddha was in meditation and the first time he had most likely given us a darshan and welcomed us. I still believe this.  The whole experience was like a miracle,” Ahmed said.

He further said that he had always made it across the rivulet even when in spate though his wife had not made it once. 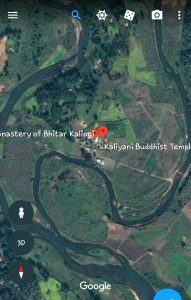 “I am sometimes ferried across on rafts made of banana stalks or bamboo tied together or walk across even when the current is strong but waters low.  But crossing the river on the raft is a bit dangerous and not always possible so I thought of giving them a boat,” he said.

Ahmed, whose religion is humanity, said that whenever he worships he goes to the Kaliyani Buddha Vihar.

Aamir Hazarika in his Facebook post states of Ahmed, ‘When the world is at turmoil and incidents of lynching and religious vendetta are taking a toll on ordinary human life, persons like Imtiaz Ahmed of K B Road in Jorhat exist for whom universal brotherhood and communal harmony are the beads which  chain the world for peace.

Some of the comments on the post read: ‘Good people transcend all boundaries’ by Sanjib Kumar Borkakoti,  president of Society  for Srimanta Sankaradeva;  ‘a pious soul who raises the value of humans’  by Sales Tax employee Nayan Jyoti Bora and ‘great example of religious brotherhood,’ by Biman Shyam.