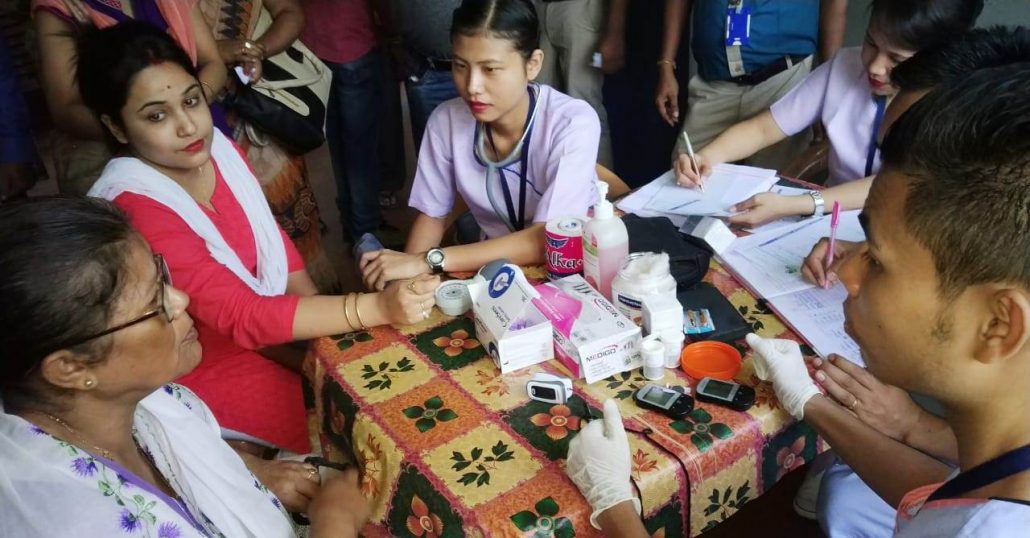 Patients being examined at the programme in Jorhat on Friday. Image: Northeast Now

Two teams of doctors from the Apollo Gleneagles hospitals on Friday examined patients free of cost at the Press Club, Jorhat and some other places in the town.

The specialists from Kolkata, Hyderabad and Guwahati–Raja Nag in Cardiology, Senthil M in Gastroenterology (liver transplantation), Chetan Kabra in Orthopedics and Srinivasan Paramasivam in Neurology, were accompanied by technicians who conducted blood tests and referred the patient to the required specialist.

On a two-day visit, the doctors, who have been divided into two teams will also examine patients at Don Bosco, Bagchung, St. Mary’s School, Kaziranga University and Jail Road Club tomorrow.

Tomorrow at 6 am they will also attend a cyclothon to create awareness on cancer and three street plays on how cancer can be prevented.

On display at the venue was an advanced life support ambulance which was   equipped with airway equipment, cardiac life support, cardiac monitors and glucose testing device, ” almost as good as an ICU.”

Apollo has two such ALS ambulances based at Guwahati which can be called for emergencies from anywhere in the state, the number of which is 1066.

In the first there was almost no loss of blood, recovery time was quicker and surgery more precise and non invasive. In the second, treatment was accorded after noting down the personal history of the patient, his genetic predilections, his lifestyle and habits.

In the third, the Apollo hospitals based in the metros had tied up with IBM Watson in which data of patients had been collected from different regions and fed into a computer to create a database.

The data of the patient under treatment would then be compared and the best treatment model would be prepared for him and given to Apollo.

Dasgupta said that in Assam the largest number of patients who were treated in the Apollo hospitals was mostly suffering from cancer or gastrointestinal problems.

“Assam has the highest incidence of cancer due to chewing of areca but and also because if polluted drinking water,” he said.