Sonowal announces setting up of organic, veterinary varsities in Assam 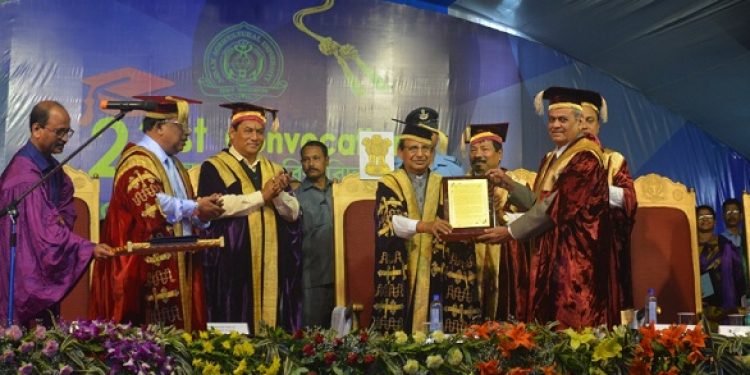 Assam chief minister Sarbananda Sonowal on Saturday announced that the government has decided to set up an organic agriculture university and a veterinary university in the state.

Addressing the 21st convocation of the Assam Agricultural University (AAU) at Jorhat on Saturday, as distinguished special guest, the Assam CM in the keynote address said both these universities would fulfil a long-felt need of the region and that the first would promote conservation of the environment and ecology.

The detailed project reports for both the universities have been submitted by the AAU earlier.  The Veterinary College at Lakhimpur was proposed to be upgraded to a university.

Sonowal while praising the students for achieving much in the academic field and bringing laurels to the state by winning awards and international recognition he said the students should also go to the doorsteps of the farmers and make a difference by guiding them on scientific methods of farming in order to increase yield as well as to go for integrated and multiple cropping.

In this way the farmers can double their income, keeping in view the objective of Prime Minister Narendra Modi.

“The state has successfully intervened in the agriculture sector by implementing the Pradhan Mantri Kisan Nidhi Yojana and other farmers’ schemes and the university has produced globally competitive human resources who have also contributed to the development of agriculture in the state in general and farmers in particular,” he said.

Also read: Assam: International guesthouse at Veterinary College to be ready by July

Jagdish Mukhi, the Assam governor and chancellor of AAU in his presidential address said that Assam’s economy was mainly agrarian and to improve the overall agricultural development in the state, the focus should shift from rice based to multiple cropping which needs to be practiced extensively.

He further said that research activities should be extended to address the emerging issues and skill upgradation of farmers needs to be strengthened.

He called for scientific soil based land use planning which would definitely ensure doubling of the state’s marginal farmers.

The chancellor further said that floods in Assam were a familiar and known phenomenon since the great earthquake of 1950.

“Mitigation of flood menace so as to counter environmental degradation and farmers’ distress caused by it is a big challenge before us. Soil erosion perpetrated by recurrent floods has cascading effects on soil health.  Appropriate strategies and its implementation in mission mode by all the departments for managing this havoc is to be firmed up,” he said.

State agriculture minister Atul Bora said during his visit to Vietnam, the government there had assured him of working in collaboration with Assam Agricultural University, which was looked upon as disbursing quality education.

He said that AAU was yet to map the productivity and profitability of some of the agriculturally developed states in the country.

“This is in fact some of the grey areas for all of you to concentrate and hammer out technology, frame a policy and lead from the front to reap the desired harvest from the sector, bridging the productivity and profitability gap,” he said.

In his welcome address, vice chancellor K.M. Bujarbaruah gave detailed account of the university’s achievements in the past two years.

The university conferred D.Sc Honoris Causa to Dhruba Jyoti Sharma, an agripreneur and Panjab Singh, president of the National Academy of Agricultural Sciences.

Altogether 1,426 students were eligible to be conferred degrees out of which more than 900 were present.