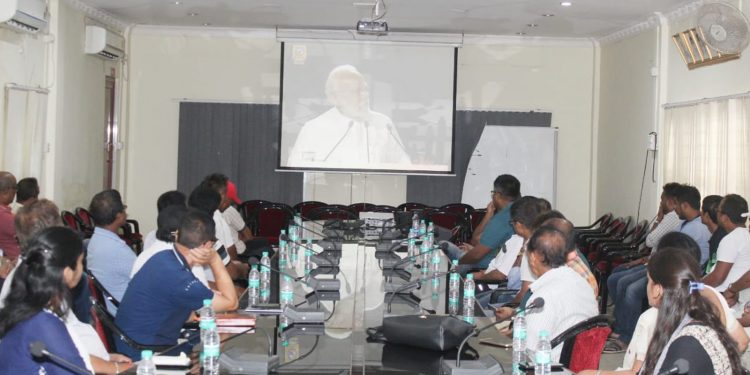 Along with the rest of the nation, Sivasagar district also witnessed the historic occasion of the launch of ‘Fit India Movement’ by Prime Minister Narendra Modi in New Delhi.

The event was organized on the occasion of the National Sports Day at the Indira Gandhi Indoor Stadium in the national capital.

A live telecast programme of the launch of ‘Fit India Movement’ was organized by the Sivasagar district administration in association with the District Sports Office, Sivasagar at Sukafa Conference Hall of the office of the Deputy Commissioner on Thursday.

During his address, Bhogeswar Baruah fondly remembered his association with Major Dhyan Chand.

He expressed his happiness over the fact that commemorating the birthday of the great sporting legend, the National Sports Day was observed on Thursday.

He also urged all to be conscious of their health and fitness.

The Deputy Commissioner also called upon all to spend at least 15 minutes a day over fitness activities.

It may be mentioned that the live telecast programme was also oganised at school level and panchayat level.

Joint Director of Health Services Ripun Borpujari; District Sports Officer Sanjay Upadhyay, Assistant Commissioners duo Gauri Priya Deuri and Manali Rajak; officers and staff of the district administration besides a host of other dignitaries were also present on the occasion.