The loudest of cry against the NRC, alleging foul play, has come from some heavyweights of the saffron brigade 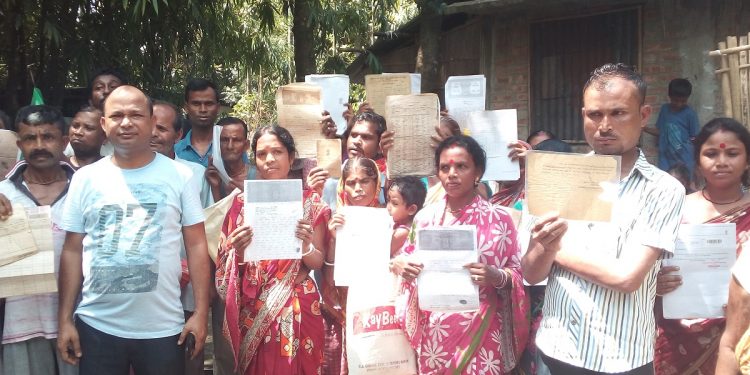 File image of people left out from NRC in Assam. Image: Northeast Now

The publication of the National Register of Citizen (NRC) on the scheduled date has virtually led to a serial and boisterous explosion of a chain of Pandora’s Boxes triggered by almost every political party and organisation as well as some individuals.

The publication was immediately engulfed in utter confusion amidst noisy and chaotic outbursts emanating from various quarters. It  now appears as if virtually every quarter or lobby directly or indirectly associated or even those not even remotely linked to the NRC has flung open a Pandora’s Box only to highlight its own interest.

The overall chorus that rents the air of Assam is a conglomeration of apparently wild and wanton cries over the NRC, while a dreaded and darkening cloud of uncertainty begins to loom over the political horizon, causing a shuddering effect on a section of the populace who have already made a cut into the final NRC. Likewise, the fear that has gripped a section of those who have been left out is simply beyond description.

As was expected on the basis of the development in the run-up to the publication, the loudest of cry against the NRC, alleging foul play, has come from some heavyweights of the saffron brigade. In fact, even as the NRC D-day was approaching, some bigwigs belonging to the ruling dispensation openly aired their wrath against the then yet-to-be published document while brazenly and aggressively banking on a religious plank.

It may be recalled that during the high profile election campaign on the eve of the 2014 Lok Sabha polls, the then BJP Prime Ministerial candidate (now PM) Narendra Modi accorded very high importance on expulsion of Bangladeshis from the State.

Significantly, during that period, he used the term Bangladeshis without any reference to their religion or the cut off date. Around that time no one could dream even by the wildest stretch of imagination that anything as obnoxious and anti-Assamese like the Citizenship (Amendment) Bill could be a boiling cauldron in the mind of the BJP think tank.

Interestingly, since the beginning of the Assam Movement against foreigners in the late 70’s, the general impression among the people of the State was that the Bangladeshis were Muslims, lock, stock and barrel. The fact that round about an equal number of Bangladeshi immigrants was Hindu was tactfully covered up by various vested interest groups.

Surprisingly, the Congress which has always been alleged to be pro-Muslim immigrants by its rivals also maintained a stony silence over the issue. Perhaps the former ruling party wanted to have the best of both the worlds in terms of vote bank.

Interestingly enough, with the publication of the final NRC, the Bangladeshi scenario in the State projected over the last 40 years as almost exclusively Muslim by various quarters has taken a massive beating. The final NRC prepared under the strict monitoring of the Supreme Court has laid bare before the world that over 19 lakh people who have failed to make it to the final list are both Hindus and Muslims.

Whether the Hindus or the Muslims are in greater number would only be known as all facts and figures of the NRC become available in the coming days. However, informed sources have revealed that the rejected number of both the communities are running neck to neck.

That being the emerging scenario on the NRC front, most interestingly the Herculean exercise carried out under the monitoring of the Supreme Court punctured a 40-year old myth on the Bangladeshi issue. This reality check which is beginning to find its due place in the political landscape of the State is being vehemently protested by those who are seemingly putting in all their efforts towards the evolution of an NRC with religion as the principal plank.

It is not surprising that quite a few saffron heavyweights took to loud crying over the NRC, alleging that the Hindus were given a raw deal by the NRC authority and that a lot more Hindus should have been included in the final NRC.  Such statements make it amply clear that immigrants, irrespective of their being Muslim or Hindu, have failed in large number to make it to the final list.

Significantly, from the comments and the attitude adopted by some high profile saffron leaders over the last couple of months or so, the conscious observer could roughly visualise that perhaps to the discomfort of the saffron zone, the passage was perhaps turning rough and bumpy for Hindu immigrants in the NRC corridor.

Further, the move by the Centre and the State Government even prior to the publication of the NRC to get down to the task of setting up of at least a thousand Foreigner’s Tribunal to deal with the cases of those to be left out of the NRC only fortified the apprehension that perhaps things were not progressing in the desired direction for the saffron dispensation.

Be that as it may, we are already in the post final NRC publication era and the mind of the vast silent majority is not quite known. However, the peace that prevails only reaffirms the patience of the people and their silent resolve to settle all matters peacefully within the framework of the law. They are also conscious of the fact that powerful forces are constantly at work to prevent the law from taking its own course. While some are crying foul that Hindus who are genuine Indians are among the rejected lot, the question arises as to what could be their yardstick for such determination.

So far as the other players are concerned, the All Assam Students’ Union (AASU) seems to be unhappy with the final NRC and has decided to approach the Supreme Court once again. It appears that the students’ body finds the rejected figure of 19 lakh plus to be far below its expectation and may be quietly justly so according to some observers.

So far as the Congress is concerned, most expectedly it appears to be a house dominated by confusion.  And why not? Along with the AGP it had done absolutely nothing in this direction since the 1985 till the Supreme Court in its wisdom decided to intervene to get the NRC update process moving.

Since 1985 the Congress and the AGP wielded power in the State for 30 years and if they had shown even the minimum of interest towards updating the NRC, the process would have been completed long ago. Unfortunately, both the parties proved themselves to be alien to the Assam Movement’s demand for ‘detection, deletion and deportation’.

Meanwhile, some quarters are calling for a re-verification of the NRC. It may be pertinent to state at this juncture that in expectation of a foreigner-free NRC, the people extended their cooperation to the fullest during period of the NRC update process. In the process they had to pay through their nose to the point of disposing of properties like livestocks or even land in order to attend to verification/re-verification hearings organised by the NRC authority in far off places.

Most unfortunately, all authorities have failed or have refused to take note of the fact that thousands of rupees of each of the tens of thousands of families had gone down the drain during the verification/re-verification process. There is no dearth of such families in the State who are now unable to make even their ends meet. Now, if at all a re-verification process is to be taken up again, tens of thousands of families would certainly fail on account of financial strangulation. It may not be surprising if some even take recourse to suicide.

However, law cannot be allowed to be derailed. The media, particularly a section of the print media, is rife with reports of overnight ‘magic’ in the last few days prior to August 31 that facilitated the reduction of the figure of 40 plus lakh of the rejected lot of the final draft to less than 20 lakh in the final NRC.

Allegations have it that having failed to produce any legacy data all along, suddenly over 20 lakh people managed to furnish such documents at the eleventh hour. It is also alleged that the NRC authority turned a blind eye and deliberately or otherwise did not abide by some of the directives issued by the Supreme Court.

It is not quite known as to how the apex court would deal with such issues if the same comes to its notice. However, in the interest of justice the indigenous population of Assam would like to wish that the Supreme Court addresses these issues.

Meanwhile, in view of the fact that over the last three decades or so, governments at the Centre as well as in the State have projected much higher figures of Bangladeshi nationals present in Assam, the much depleted figure of just over 19 lakh certainly appears to be be a matter of serious concern from the demographic point of view for the indigenous populace.

One also feels that a re-verification of the 40 plus lakh rejected in the final draft could be an option to determine if errors have been made that caused the number of the rejected persons to be depleted to just over 19 lakh in the final NRC.

On the other hand, the utter inefficiency of some of the NRC officials, have made the process complicated. Cases have come to light where names of some members of a family have been included in the final NRC while some others of the same family have failed to make it to the list.

At the end of the day it is clear to all that the final NRC may be far from being completed. While the issue of foreigners is now four decades old, one shudders at the thought that a section of our political fraternity may leave no stone unturned to keep the foreigners issue alive for many more decades to come.

In this respect the NRC issue may become a new tool for an unscrupulous political lot to be possibly assisted by some from the bureaucracy. If such a cycle takes root in the body politic of Assam, it is certain that the people of the State may be in for the worst possible time.

The kind of comments made by some bigwigs of the ruling front on its future course like amendment of the Constitution and framing of new laws to evolve a ‘correct’ NRC, one shudders at the thought if real trouble times are ahead and if peace may turn into a rare commodity.

The legal maxim “Justice delayed is justice denied” seems to have made a full circle. If the Mughals that had called the shots in Assam for thirty years since 1985 had not turned their back to the Assam Accord and the NRC, perhaps the State would have been witness to a better and peaceful present and future.

“Is it war or peace?” is the watchword in TS Eliot’s ‘Murder in the Cathedral’. If the words are to be borrowed, in a similar light one may ponder “is it unrest or peace?” One can only hope, wish and pray that organisations like the AASU puts in the appropriate gear and that with the blessings of the Supreme Court peace shall continue to prevail in Assam, while all sinister designs by anti-indigenous forces may find way to the dustbin of history.