Love to perform Poomsae which keeps me fit and healthy: Trilok Subba 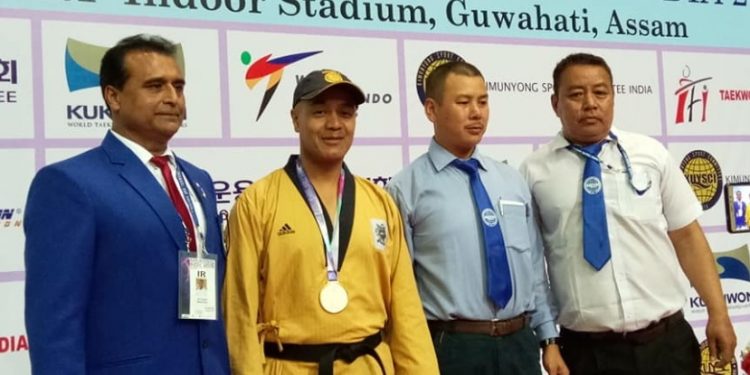 Trilok Subba posing for photographers with the gold medal during the prize distribution ceremony in Guwahati recently. Image - Facebook @trilok.subba.7

Sharing some images of the prize distribution ceremony held at the Deshbhakta Tarun Ram Phukan (DTRP) Indoor Stadium in the city, on the social networking site Facebook, Trilok Subba stated:

“Love to perform Poomsae which keeps me fit and healthy.
My 1st Gold Medal in the year 2019,
Kimunyoung Taekwondo Championship at Guwahati, India held from 29th to 31st March 2019.”

According to reports, around 1,200 players participated in the event which was divided into the categories of Senior, Junior, Cadet and Sub-Junior.

In the event, there were both male and female categories.

A media report quoted Trilok Subba as saying:  “I am extremely proud to win gold medal in this prestigious championship, as this championship was organised in the memory of Former World Taekwondo Federation president Dr. Kimunyoung, who was founder of World Taekwondo Federation. This has boosted my morale and I am confident that my win has motivated my students too back home.”

He has many feathers in his cap, both as a player and coach.