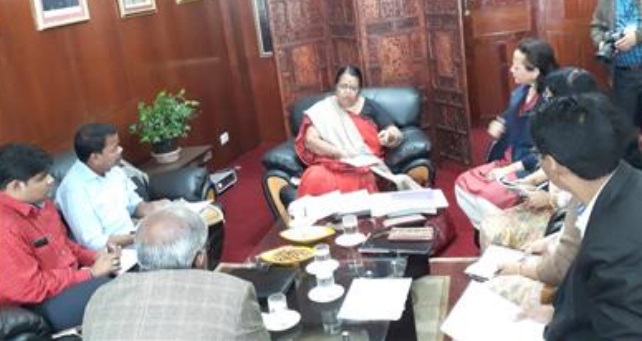 Union Tribal Affairs Ministry (MoTA) secretary Leena Nair held a meeting with the Sikkim Chief Secretary and senior officials of the State Government in connection with granting of Scheduled Tribes (ST) status to the eleven communities of the State in Gangtok.

During the course of the meeting, State Social Welfare Secretary Sarala Rai apprised visiting Tribal Affairs Ministry Secretary about the initiatives undertaken by the State Government to include the eleven left out communities in the list of STs.

Also read: Sikkim pulls up sleeves to give tribal status to 11 ethnic communities

She also apprised the visiting secretary about the special provisions for Sikkim under Article 371 (F).

She explained that when Sikkim was merged with India, there were three communities namely Bhutia, Lepcha and Nepali who were ‘subjects’ of the then king.

Subsequently, the Bhutia and Lepcha communities were granted tribal status, and later a few sub-communities from among the Nepali or the Gorkhali constellation were granted Scheduled Caste (SC) status, while the Limboo and Tamang communities became Scheduled Tribes (ST).

She further added that this ‘selective action’ has violated the provision of equitable arrangement for ensuring the social and economic advancement of different sections of the population of Sikkim as provided under Article 371 (F).

She further said that the ‘historical mistake’ led to injustice meted out to the eleven left out communities of Sikkim.

Now, she had stressed that it should be mended, with intervention from the Union Tribal Affairs Ministry.

On her part, the Tribal Affairs Ministry Secretary stated that the Ministry will ‘revisit’ the documents and correspondences made between the State and the Central government in connection with the demand for inclusion of left out communities in the ST list.