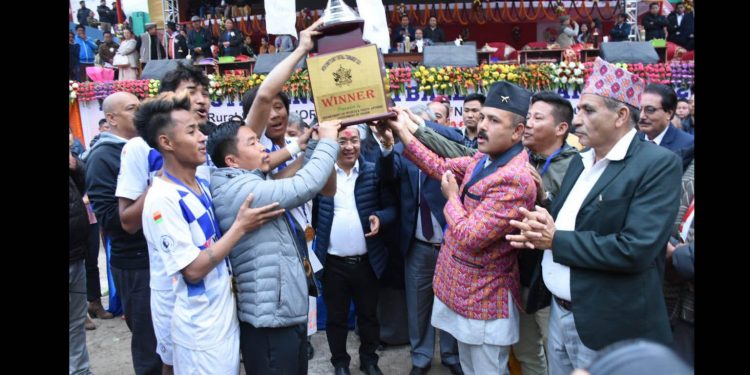 Zoom-Salghari emerged as the champion of the inter-constituency football tournament played at Jorethang ground in South Sikkim.

A goal by Dilliram Sanyasi helped Zoom-Salghari to edged past Barfung 1-0 in the final match played on Wednesday.

Dilliram Sanyasi scored the winning goal for the team in the 60th minute of the match.

Chief Minister PS Tamang was the chief guest of the match, while sports minister Kunga Nima Lepcha was the guest of honour.

Apart from the final, an exhibition match between the Chief Minister XI and Chief Secretary XI was also played on Wednesday.

Karma Loday Bhutia, RK Gajmer and Bhim Hang Limboo scored a goal each for CM XI, while a lone goal of CS XI was scored by Bikram Tamang.

Sanjeev Rai of Salghari Zoom has bee adjudged as the Man of the Match.

On the occasion, the CM announced that a state-level football team will be constituted by taking the best players from this tournament.

It has been informed that winner of this tournament will also get direct entry into the next edition of the Chief Minister’s and Governor’s Gold Cup Tournament.