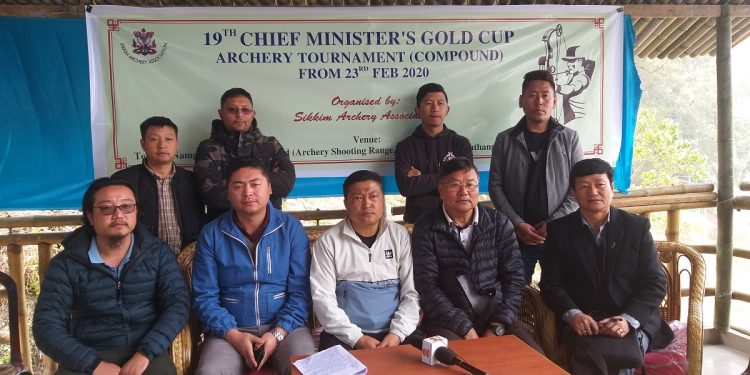 Twenty-three teams from in and outside the State are taking part in the 19th edition of this traditional form of archery tournament this year.

This is also the first event for the newly elected executive committee of the SAA led by Sonam Dorjee Bhutia as president.

Addressing a press conference in Gangtok on Monday afternoon, SAA joint secretary, Sangay Gyatso Bhutia mentioned that the tournament has 14 teams from different parts of Sikkim, two from neighbouring hills of West Bengal and seven from Bhutan.

He said the newly formed executive committee was very happy and excited to organize the 19th edition of this prestigious traditional form of archery in a grand manner.

The new executive committee of SAA was formed on January 5 this year.

He stated that the main objective of the tournament was to preserve and promote the traditional form of archery which has been played nowadays only in Sikkim and few places in the neighbouring hills and Bhutan.

He stated that the association has been working to take this traditional form of archery to the young generation to preserve and promote in coming generations.

On behalf of the association, Bhutia expressed his gratitude to the State Government for extending all support for the promotion and development of archery in the State.

“We would like to thank the State Government for providing financial and other support not only to archery but in other sports as well,” he said.

“We hope for the same support from the government continuously for the promotion and development of sports and betterment of sportspersons,” he expressed.

He stated that such traditional sports would also help to promote tourism of the State.

Yangtse Tours & Travels from Bhutan is the defending champion of the tournament.

The tournament carries cash prizes of Rs two lakhs to the winner and Rs one lakh to runners-up.

SAA president, Sonam Dorjee Bhutia mentioned that the association was formed in year 1985 and has been working preserve and promote traditional archery and has also been conducting talent hunt, coaching camps and exposure to archers of Sikkim in the modern archery in and outside the State.

He stated that the new executive committee has lots of programmes and targets for the further development and promotion of traditional and modern archery in the State.