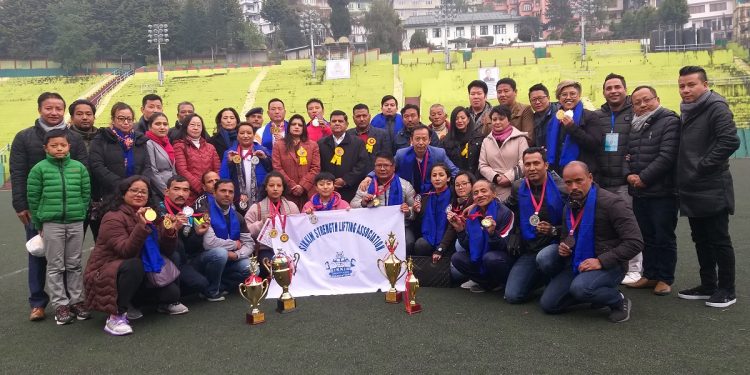 Sikkim Strength Lifting Association (SSLA) on Thursday felicitated its team members for their outstanding performance in the recently held 29th Senior and Master National Strength Lifting Championship 2019 for Men and Women at Udaipur in Rajasthan.

A 32-member SSLA team had represented Sikkim in the championship and bagged a total of 28 medals for the State.

The felicitation function, which was here held at Paljor Stadium conference hall, has the Chairperson for Sikkim Commission for Backward Classes, Pabitra Bhandari as the chief guest.

The function was also attended by president, B K Roka and general secretary, Jaslal Pradhan from Sikkim Olympic Association and executive members of Sikkim Krantikari Morcha’s sports wing among other dignitaries.

In her address, the chief guest congratulated the SSLA team members for making the State proud with their outstanding performance in the national championship.

She expressed that Sikkimese sports persons have been shining the name of the State with their performance in their respective disciplines.

Bhandari stated that games and sports were the priority sector of SKM government and the chief minster P S Tamang have been working for the development of sports and its infrastructure in the State and for the betterment of sports persons in the priority basis.

On the same, he urged young and upcoming sports persons of the State to take the full advantage of this favourable environment for sports in the State to excel in their respective discipline.

She mentioned the State government has been committee to take local talents from all corners of the State to the national and international levels.

Earlier, SSLA president, T D Denzongpa mentioned that SSLA has been successful in producing the national and international lifters from different corners of the State in a short span of time.

He also appreciated the performance of women’s team of Sikkim in the championship by lifted the champion’s trophy.

Likewise, SSLA general secretary, Sonam Tshering Bhutia expressed that SSLA has been working to promote strength lifting to all parts of the State to bring out more talented lifters especially from rural parts.

He stressed upon the need of support to the association from all sides in guiding young generation on the productive path.

The function was also addressed by chief coach, Pema Dorjee Bhutia and legal advisor, Prashant P Waiwa of the association among other dignitaries.