Pakyong Airport is the only airport in the Himalayan State of Sikkim.

After a gap of nearly 19 months, flight operations have resumed at Pakyong Airport in Gangtok, Sikkim.

The Airport remained non-operational for the last 19 months due to technical reasons and uncertain weather conditions.

The Pakyong Airport was inaugurated by Prime Minister Narendra Modi in September 2018.

Notably, Pakyong Airport is the only airport in the Himalayan State of Sikkim. 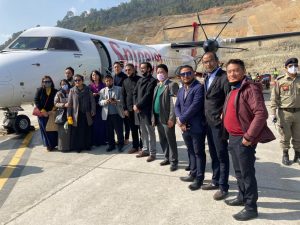 A SpiceJet aircraft with 57 passengers from Delhi landed at the Pakyong airport on Saturday.

The flight returned with 21 passengers.

Calling it a historic day, Sikkim Health Minister MK Sharma said that the airline services will be a lifeline for Sikkimese people and boost tourism in the State.

Meanwhile, SpiceJet, the only airline to offer daily direct air connectivity between Delhi and Sikkim said, “We are delighted to resume our flight operations to Gangtok and put Sikkim back on India’s aviation map!”

We are delighted to resume our flight operations to Gangtok and put Sikkim back on India's aviation map! The first resumed flight from Delhi to Pakyong (Gangtok) took off from IGI Airport at 9:30 AM today. Here are glimpses of the first flight to this hidden North East treasure. pic.twitter.com/cXtAPf1rke

With special procedures & additional safety aspects in place, operations resume from Pakyong airport on 23 Jan. @flyspicejet recommences Delhi-Pakyong-Delhi flight under RCS-UDAN.
This will fulfil the aspirations of people of Sikkim & will provide impetus to local economy. pic.twitter.com/J5gHngKO4O

Meanwhile, Sikkim Chief Minister PS Golay said that resumption of airline services at Pakyong will bring in a new era of travel in Sikkim.

“It will help in mitigating issues faced by the State in transport,” CM PS Golay said.

Emergency in 1975 was a mistake, says Rahul Gandhi