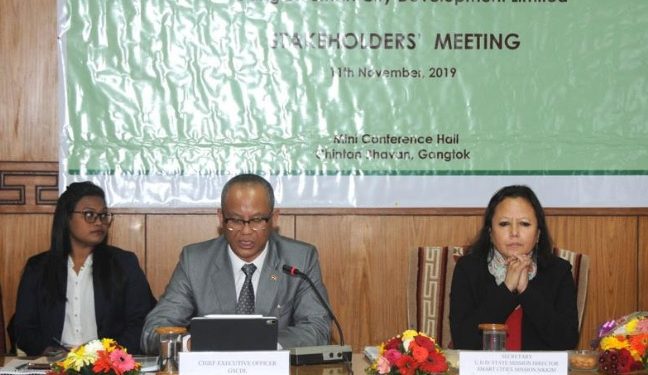 The meeting was chaired by secretary, Urban Development department, Sarala Rai, who is also the state mission director of Smart City Mission.

While delivering his keynote address, the CEO, GSCDL, gave a brief history of the Smart City Mission which was launched on June 25, 2015 by the Ministry of Urban Development (Ministry of Housing and Urban Affairs, MoH&UA), Government of India (GoI) as a pan-city initiative with its core component being area-based developments.

The funding for Gangtok Smart City will be 50:50 sharing basis between Government of India and State/ULB, he added.

Stressing on the objective of the mission to be provision of core infrastructure, sustainable environment and application of smart solutions in cities, Subba stated that the mission envisages projects embodying principles of participation, innovation, sustainability and technology to enhance the ease of living of the citizens.

The CEO further highlighted that the total area of area-based development under Gangtok Smart City proposal is 366 acres with a population of about 30,000 and includes Lower MG Marg, Upper MG Marg, Deorali, Tibet Road, Arithang and Diesel Power House.

Likewise, the Pan City proposal is an integrated ICT based solution for management, monitoring & control and e-governance system for municipal service delivery.

Concluding his remark, the CEO highlighted on the importance of planning and called for cooperation and active participation of all the stakeholders for effective deliberation of Gangtok Smart City Project.

He also touched upon other projects concerning rain water harvesting, development of infrastructure in wards, Palace rejuvenation and redevelopment, road and junction improvement, and construction of Convention Centre along with MLCP.

The GSCDL presentation was followed by another presentation delivered by a representative of Bharat Electronics Ltd on Integrated Command Control Centre (ICCC) project for Gangtok Smart City.

He informed that BEL in consultation with respective stakeholders had conducted surveys of various track (smart) elements in order to identify feasible locations for betterment of citizens of Gangtok.

One of the key highlights of the proposed projects under ICCC was Smart Parking system on street parking wherein one could receive feeds on the status of parking across the town which in turn will be managed by Smart Parking command centre. Through this system, one could also avail information of available, non-available parking spots and functional, non-functional parking slots.

The BEL representative added that this facility could also help ease the ongoing major issue of traffic congestion in Gangtok.

The Urban Development secretary, while addressing the meeting, stated that the Smart City Mission is a complex and multifaceted concept that catalysis smart solutions and enables a city to identify its potential and challenges for a better quality of life.

With proper implementation of planning and consultation with stakeholders, the challenges placed ahead can be effectively resolved in order to achieve a Smart Gangtok, she added.