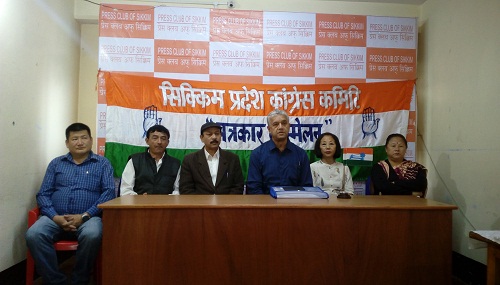 Addressing a press conference here, Basnet condemned the policies of Modi government for the price rise of petroleum products. He said Congress party has been protesting the policies of Modi government which is responsible for price rise of essential commodities. He further said people from different walks of life  have been facing extra burden due to GST.

Speaking on the ongoing state tour of Chief Minister he alleged that the speeches of the CM were full of lies and false announcements. He added that after losing with its policies and principles, the SDF government has started the politics of announcements keeping in mind the election. He also said increase of seats of Sikkim Legislative Assembly to 40 is the direct violation of the Article 371 F.

Basnet urged SDF and BJP to stop drama to mislead the people. He alleged that BJP and SDF have been enacting drama by trying to show differences but actually they are very friendly to each other. He appeals to all opposition parties of the state to come together under one platform in the interest of Sikkim and its people.