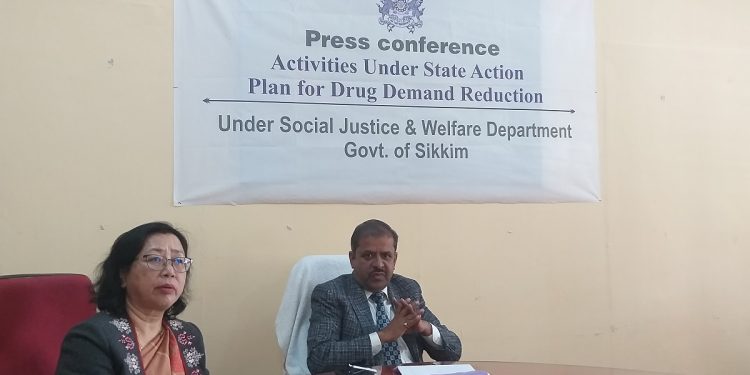 The Social Justice & Welfare Department of Sikkim is organizing a series of activities to create mass awareness on substance abuse.

The department has prepared awareness activities under the state action plans for drug demand reduction.

The department has appealed every individual to come forward to eradicate substance abuse from the State and to lead the young generation on the healthy and productive path.

Addressing a press conference in Gangtok on Thursday afternoon, minister for social justice & welfare, Dr M K Sharma mentioned it was high time for everyone to make the people award on substance abuse and to take strong action against it. “We have not been able to get the desirable results despite of our hard efforts against substance abuse due to lack of awareness among the mass,” Dr Sharma said.

“So it is high time for everyone to awareness especially among target group of youths in productive age,” he expressed.

He appealed all to deliver their respective responsibilities and roles to create mass awareness to lead youths towards healthy and productive activities.

The minister mentioned that the fundamental component of this series of activities were awareness, capacity building and intervention.

He informed that the department was all set to organize a series of sports, music and other creative activities especially among youths to encourage them in the healthy and creative fields.

He informed that the department has come up with an idea to conduct children’s parliament in the State.

The children’s parliament is scheduled to be held on November 25 next at Manan Kendra, which will have students from different schools.

The children’s parliament will have 23 parliamentarians from South Sikkim to run the parliament, which will be witnessed by students from different schools of the State.

Dr Sharma informed that the children’s parliament will discuss on existence law regarding to substance abuse and will decide future course of action against this issue.

This will be followed by inter-rehab centres football tournament from November 28 to December 3 at Paljor Stadium.

The department is also organizing a flash mob at MG Marg on November 30 and other creative activities to create awareness.

The minister informed that the department has decided to organize these activities frequently by involving different sections of the society until desirable results.

He stated that the department has been working to remove stigma by changing the mindset of the people.

Likewise, secretary to Social Justice & Welfare Department, Dhan Jyoti Mukhia mentioned that the department has prepared the state action plans to take the issue of substance abuse seriously and for drug demand reduction.

She mentioned that the department was engaging NGOs, students, rehab centres and other sections of the society to create mass awareness.