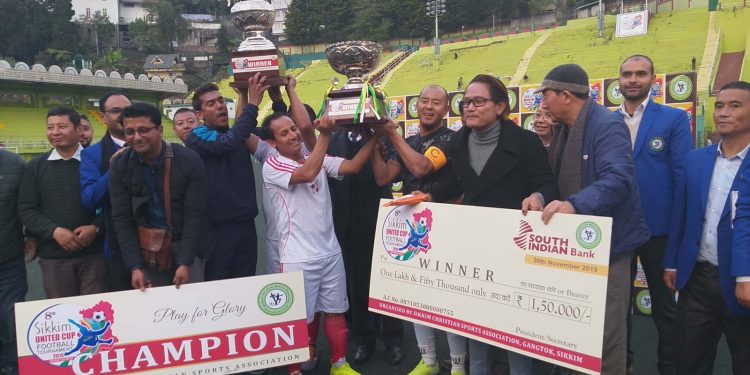 The 8th edition of the Inter-Church Football Tournament was organized by the Sikkim Christian Sports Association (SCSA) on this year’s theme ‘Play for Glory’.

A total of 29 teams from four districts of Sikkim and a team from Darjeeling participated in the tournament.

The tournament, an annual event of SCSA, continues to be organized since 2012.

The final match of the tournament was witnessed by the administrative advisor to the Sikkim chief minister, MP Subba as the chief guest.

Gangtok legislator YT Lepcha was also present as the guest of honour among other dignitaries.

Both the teams maintained a good pressure on each other with an attacking game in the final match from the start.

However, players from the both teams missed some good chances to take the early lead in the match.

Finally, Kunjaman Thapa gave a breakthrough to EPCS with his goal in the 30th minute to end the first half with 1-0 lead.

The second half was again full of attacks and counter-attacks.

When players of ABYF struggled hard to come back into the match, Dewashish George Rai doubled the lead of EPCS in the 64th minute to seal 2-0 victory for his team.

ABYF boys played their hearts out but were not able to give any successful finishing.

The chief guest and guests of honour gave away trophies and cash prizes to the winners.

Omega Church, Gangtok received the Fair Play Trophy while Biman Bhujel of ABYF Baptist Church adjudged as the Man of the Match.

Man of the Tournament trophy was awarded to Vivek Bhutia of EPCS Namchi and Ajay Subba of ABYF Baptist Church received the High Scorer’s trophy for 11 goals in the tournament.