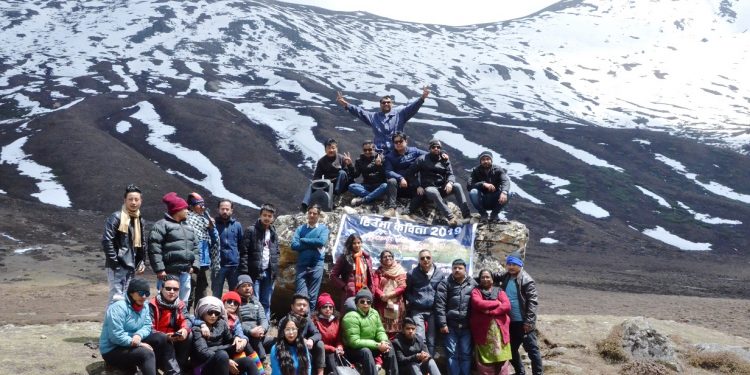 In a unique initiative in the field of literary activity in Sikkim, the team of Chiya Kavita organized ‘Hewma Kavita 2019’ (poetry meet) last weekend at the most popular tourist destination Gurudongmar in North Sikkim.

The two-day long literary event had the participation of poets from Sikkim and Darjeeling at the tourist spot which is at the height of 17800 feet.

On the first day of the event a Kavita Gosthi was held at Chungthang Gurudwara premises in North Sikkim and was participated by poets and litterateurs from Sikkim and Darjeeling. It is added that poets also deliberated on different topics on the present situation of poem in the region and also placed their respective works in the event.

The main highlight of the second day event at Gurudongmar was the poem recitations by poets from Sikkim and Darjeeling. Speaking about motive and activities of Chiya Kavita, its coordinator, Prabin stated that the main objective of such event was organize literary activities near to the nature by bringing it out from its traditional stages and closed rooms. He stated that initiatives of Chiya Kavita have been getting encouraging response from all sides and many people have been connecting with it.

Chiya Kavita team expressed its deep gratitude to a poet of Indian Army, Amrit Chettri and his fellow personnel, Chungthang Police and Gurudwara Managing Committee for their support towards the event.