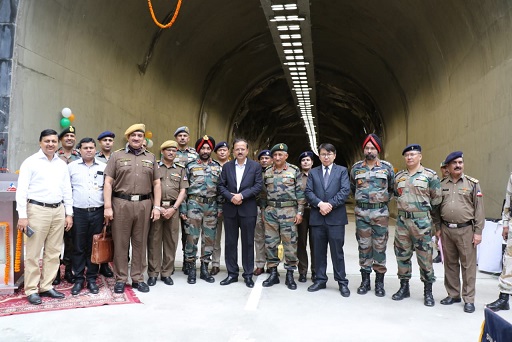 Union Minister of State for Defence, Dr Subhash Ramrao Bhamre along with BRO officials during the inauguration of Theng tunnel in North Sikkim on June 7, 2018. Photo: Sagar Chhetri

The newly constructed Theng tunnel on Chungthang-Mangan highway in North Sikkim was inaugurated by the Union Minister of State for Defence, Dr Subhash Ramrao Bhamre on Thursday. The first of its kind, 578 meters long Theng tunnel has been dedicated to the people of Sikkim and the nation.

This 578 meters long tunnel at Theng has been constructed by Border Road Organisation. Theng tunnel is a strategically important tunnel at Theng near Chungthang town which will bypass the troublesome narrow and steep stretch of road in the area. This area was very prone to accidents and traffic snarls and this tunnel has now fulfilled the long pending demand of the people of North Sikkim.

In his address, the Union Minister said North Sikkim is a strategically important region and the Union Government has been working on improving the infrastructure in the region.

Director General of Border Roads, Lt Gen Harpal Singh said Theng tunnel will usher in rapid development of the tourism in North Sikkim. He said that BRO was a premier organization executing works in the most inhospitable terrain of the country.

The tunnel was built by Project Swastik of Border Roads Organization and construction was carried out by AIREF Engineers in record time of 20 months. The tunnel has full fire safety feature with fire hydrants and big tank for storage of water and it is illuminated by LED lights and has one safety exit in case of emergencies.