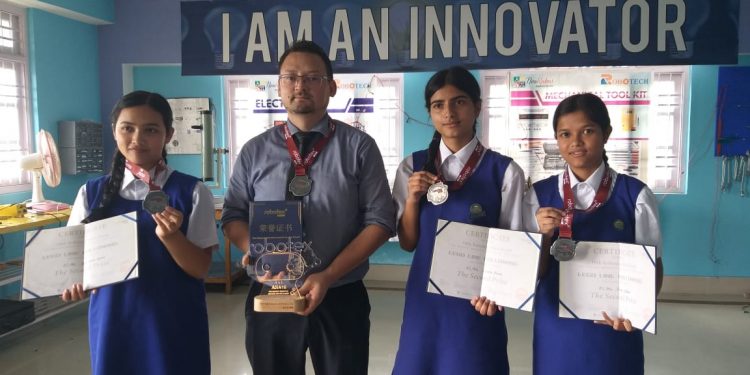 A three-member team of Atal Tinkering Lab of Paljor Namgyal Girls Senior Secondary School in Sikkim has made the State proud by coming second position in the recently held Robotex Asia at Shanghai in China.

The team was mentored and accompanied by their physics teacher and inchrage of ATL PNGSSS, Ivan Dorjee Lepcha.

It has to be mentioned here that the Lego Line Follower Team from PNGSSS has been qualified to represent the country in their respective category in Robotex Asia and Robotex International after bagged the first position in the Robotex National held on 27 and 28 July this year at Ahmedabad.

It is informed that Robotex Asia hosted 12 different competitions with 3280 competitors from ten countries and more than 30,000 people visited the event.

Indian teams had also participated in other categories of Robotex Asia but only Lego Line Follower team of PNGSSS have been able to win the prize for the country.

It is informed that Lego Line Follower category had more than 250 competitors.

Speaking to media persons in Gangtok on Wednesday, they expressed that the competition was really tough and competitive in the presence of the technology giant countries of Asia.

“It was a honour for us to represent the country and we gave our best in the competition and it is really exciting and encouraging moment for us to bag the second prizes in such tough competition,” they said.

They expressed that the competition was a learning experience for them to improvise and to give the best in the upcoming Robotex International to be held in November at Tallinn in Estonia, Europe.

“To stand at the second position in such tough competition among technology advanced countries took away our inferiority and filled us with new energy and confidence for our upcoming international competition,” they expressed.

Likewise, the team mentor, Ivan D Lepcha expressed that the credit for this big achievement goes fully to the team members.

He mentioned that this exposure and achievement have boosted the morale of students to do better in the upcoming Robotex International.

“It was heartening to know in the competition that other advance countries have also been using the same sensor placement using by us and this shows we are moving on the right direction. We just need to increase the speed of our robots,” he said.

He said coming from a school Indian State with limited technological exposure, ALT PNG team has made the country proud by bagging the second prize in the biggest robotics festival in the Asia.

The team expressed its gratitude to the School Principal, Jem Pandi Targain for her constant support to ensure the best performance in the competition and finally the team back home with Sikkim’s biggest achievement in robotics.