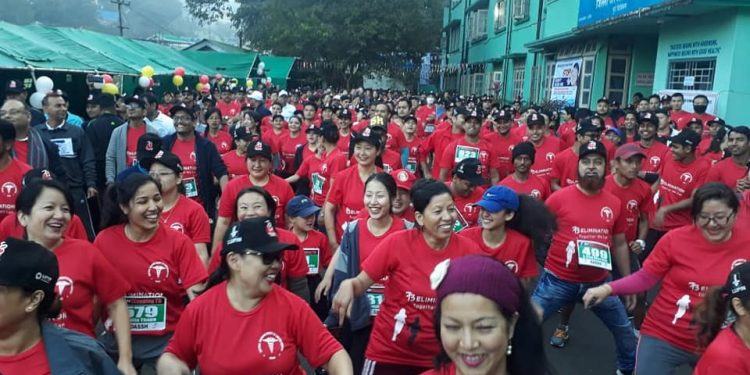 A total of 551 runners have participated in a mega marathon ‘Run with Doctors for TB Free Sikkim’ held at Singtam in East Sikkim on Sunday.

The 15 km marathon was organized by the Doctors Academic Society of Singtam Hospital (DASSH) to create mass awareness among general public on tuberculosis.

The marathon has witnessed the participation of doctors, nurses, lab technicians, paramedics, panchayats, members of different organizations and sports associations and general public.

The marathon was flagged off from the District Hospital Singtam and participants cover the route on the national highway upto Majhitar and back on the same route to the starting point.

The marathon has aimed to generate mass awareness to eliminate TB from Sikkim by year 2022.

In men’s category, Nar Prashad Rai finished the marathon on the first position by leaving Dhiraj Rai on second position and Abinash Rai on third position.

In veterans’ category, Madan Sapkota and Radhika Pradhan emerged as winners, while the oldest participant, 83-year-old Phumpi Lepcha and youngest eight-year-old Noorpun Lepcha were also acknowledged for their commendable spirit and participation.

Minister for Health Care Human Services and Family Welfare Department, Arjun Kumar Ghatani, who is also the Chief Patron of the organizing committee, gave away medals, certificates and cash awards to winners.

In his address, the Minister congratulated the organizers for their initiatives to combat tuberculosis with motivated commitment and dedication through such sporting event.