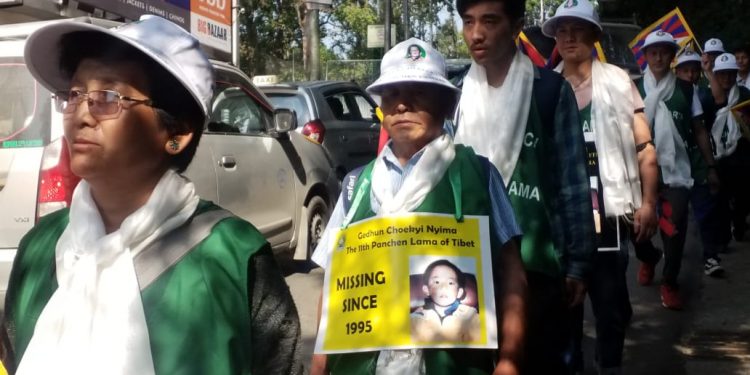 A peace march to commemorate the 30th birthday of 11th Panchen Lama, Gendun Choekyi Nyima, was started from Chokasum hall here at Namnang on Thursday. Around 250 members of Tibetan community have participated in this rally which will conclude at Salugara in Siliguri of West Bengal.

This peace foot match is being called by Tibetan Women’s Association (TWA) across the country to commemorate the 30th birth anniversary of the 11th Panchen Lama. Same rallies have also been simultaneously started on Thursday in other four zones in India, Dharamsala to Chandigarh, Dehradun to New Delhi, Nagpur to Chhattisgarh and Mysore to Bangalore.

As per TWA, the 11th Panchen Lama was abducted by Chinese government at the age of six years so the association has launched this nation-wide peace march to commemorate his 30th birthday with a demand of his immediate release. The rally is scheduled to cover atleast 25 kilometres every day and to reach Salugara on the fifth day of the march. It is informed that a special ceremony will be conducted on the sixth day at Salugara.

TWA general secretary, Tshering Choezum stated that rally has been organized to give a message to the world about the injustice to Panchen Lama and entire Tibetan community by Chinese government. She also urged the people and Indian government to create pressure on the Chinese government for the immediate release of the Panchen Lama.