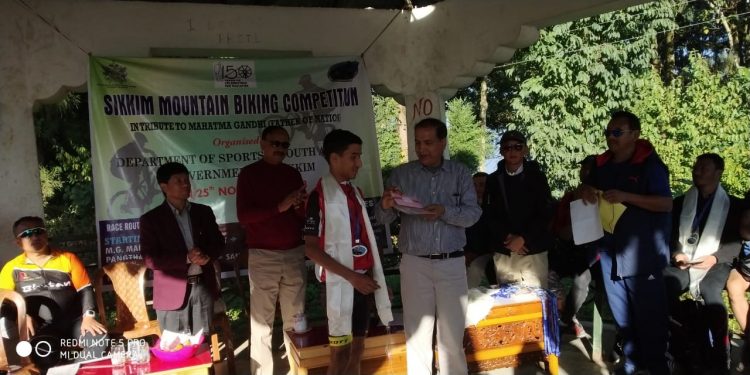 Asim Sharma of Sombaria, West Sikkim emerged as the champion of Sikkim Mountain Biking Competition 2018 held in Gangtok on Sunday.

He finished 65 km race with the timing of two hours 40 minutes six seconds and 13 mirco seconds.

The event was organized by the Department of Sports & Youth Affairs, Government of Sikkim to pay tribute to the Father of the Nation Mahatma Gandhi.

Thirty-nine cyclists from Sikkim, Kalimpong, Darjeeling and Siliguri have participated in the competition.  The competition was flagged off by Gangtok MLA, Pintso Chopel Lepcha from MG Marg and followed the route on MG Marg, Tashi View Point, Pangthang, Samdong, Upper Tumin, Khamdong and Sang and finally ended at Rumtek.

Addressing the participants, Gangtok MLA expressed his happiness on participation of good numbers of cyclists in the competition especially young children.

He congratulated the department of Sports & Youth Affairs for organizing the event to encourage youngsters in sports and to promote mountain biking in the State.

He expressed that such event would also help to promote Sikkim as the hotspot for adventure activities.

Likewise, Secretary to Sports & Youth Affairs Department, S D Dhakal stated that the Department was celebrating the 150th birth anniversary of Mahatma Gandhi through sports throughout the State.

He stated that mountain biking was an international event so the Department would work to further promote this sports in the State.