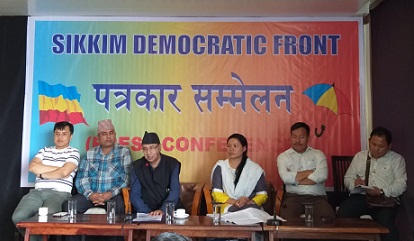 Sikkim Democratic Front (SDF) party spokesperson Bhim Dahal lashed out at the opposition parties in the State for allegedly making fabricated and baseless allegations against the ruling party and its Government.

Dahal stressed that the opposition parties in the State, including the newly-formed party, have no any vision, programme, policies and responsibility towards the people but have the only agenda to make false and baseless allegation and personal attacks on the ruling party and its leader.

Dahal also suggested the opposition parties to do a thorough research and study before making any statement on any matter. He also stated that the local farmers and producers of the State have increased production and have been getting good prices against their organic produces.

He added that they have been successful in fulfilling the local demands of the State to many an extent.

Dahal expressed his confidence that Sikkim would soon become a self-sufficient and self-reliant State in all areas. While strongly condemning the allegations of the opposition parties, he expressed that the Sikkim Organic Mission has been successful so far and more success would come in days to come.

He added, “As they have no any responsibility, vision, programme and policy for the people, the oppositions have been making false and baseless allegations and personal attacks on our party (SDF) and the Government.”

Responding to media queries, he stated that opposition parties should speak on their policies and programmes instead of making false and irresponsible statements to mislead the people, especially the youths of Sikkim.

On the Limboo-Tamang seat reservation issue, Dahal mentioned that the SDF party and its Government have been working consistently and honestly together on this issue since inception.

“SDF party and its Government have been working on this issue day and night and we are hopeful and positive that Limboo and Tamang will soon get their seats in the State Assembly,” said Dahal. However, he mentioned that the SDF was the only party which has been giving at least 5 representatives from Limboo and Tamang community in every election and among them, many have served and serving the people in the Cabinet ranks.